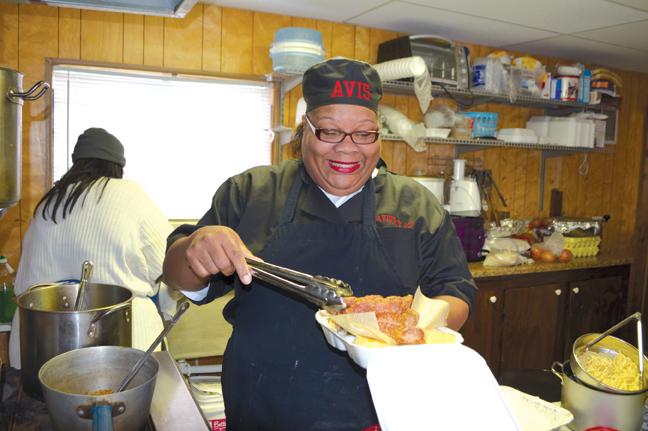 LUTCHER – Perhaps no one, least of all Avis Lightfoot White herself, could tell where the hours spent in her grandmothers’ kitchen would lead all these years later.

Raised in Kenner, White recalls the time spent with her father’s mother fondly.

“She was very instrumental,” said White. “When I was a child, we cooked breakfast, lunch and dinner. I’ve been cooking since I was about 6 years old.”

The Vacherie resident said it was her grandmother who taught her the basics of cooking the southern delights that have come to be known as “soul food.” And although from that point on her career path was ordained, it took White many years before she discovered this herself. She first completed a degree in education before attaining a master’s degree in criminal justice with the hopes of attending law school. Despite these lofty ambitions, White knew nothing made her quite as happy as cooking.

“I just love to cook,” she said. “Nothing to me was as satisfying.”

Then in January 2010, everything changed.

That’s when, on her way to Metairie she heard about auditions for a new reality competition television show called “Master Chef” with celebrity chef Gordon Ramsay of “Hell’s Kitchen” fame.

Right from the start of the audition process, White’s big, warm personality carried her far, even before anyone had tasted a bite of her food. She said after doing a short video interview, she was moved to the front of the line.

When she finally got to cook for the judges, she stayed true to herself and let her love of food and southern cooking do the rest.

“I did seafood pies for them,” she said.

While it was largely her personality that had gotten her this far, White’s food let the judges in on something those close to her had known for years, White was a wizard in the kitchen, spinning seemingly ordinary dishes into true culinary masterpieces. The judges were duly impressed.

“On March 11 I boarded a plane and stayed in California for four weeks,” she said.

White made it all the way to the top 14, an accomplishment she remains proud and thankful for.

“I really wasn’t disappointed. My mission had been accomplished,” she said. “It was a wonderful experience. Because of that, I was able to do other things.”

One of those “other things” is White’s latest venture, Avis’s Place, a small takeout lunch venue in Lutcher that is steadily becoming the go-to lunch destination for those seeking good, home-style cooking that she opened Dec. 1.

She said that while many of her early customers came in because they wanted to taste the food of the former “Master Chef” contestant, the quality of the food has kept them coming back for more.

White’s menu features two meal options each day, often mixing a traditional meal with something customers might not normally eat. Tuesday’s, for example, feature not only a white beans and rice plate but also a plate of White’s pork stew, an item she said has become quite popular.

“I though about what people would enjoy eating,” she said. “Sometimes they can’t make their minds up.”

White said she is more than happy to provide such customers with a plate of each.

And although White says the small eatery is just the beginning for her, she knows she has found her place alongside her helper, Michelle Parnell, who has been there from the start of the venture.

“I love people. I love to talk to people,” she said. “This is where God has placed me.”