All fun and games 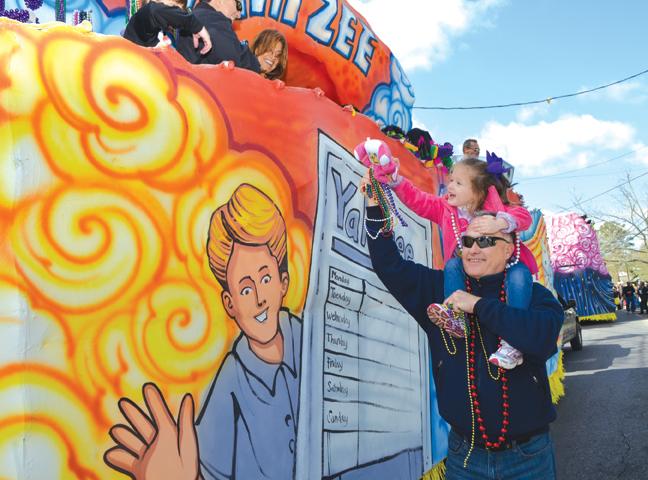 LAPLACE – Throngs of residents from across St. John the Baptist Parish lined the parade route Sunday afternoon as the Krewe du Monde procession took to the streets of LaPlace under sunny skies and near-perfect temperatures.

The 38th annual parade, organized by the LaPlace Lions Club, embodied the family element of the Mardi Gras season as the route was populated by large get-togethers in front of homes and near businesses, many of which featured food and music.

“It’s a little bit of the New Orleans carnival spirit right in our front yards,” said LaPlace resident Gwendolyn Frank, who was gathered with extended family and friends. “We are all certainly happy the rain ended yesterday.”

Much like last year at this time torrential downpours Saturday afternoon affected the other parades in the region that roll the weekend before Mardi Gras. Officials canceled the Towahpahsah parade in Reserve. Also canceled was the Krewe of Lul parade in Luling, which failed to roll for the second year in a row. Although the skies looked ominous to start the day, the clouds gave way to the sun as the parade started to roll.

“It seems like the sun always shines on us on this day,” said Robert Laiche, who was on the route along West Fifth Street. “It makes for a much more pleasant experience, obviously.”

Assorted pageant queens and royalty from various high school carnival balls led the procession through the streets, followed by 28 floats full of riders, many of whom celebrated the previous evening during the krewe’s ball held at the Pontchartrain Center. The parade also featured dance teams, school marching groups and bands from East St. John High, Riverside Academy and Lutcher High.

The festive mood carried on well after the final float passed as many gatherings lingered along the route continuing the party into the late afternoon.