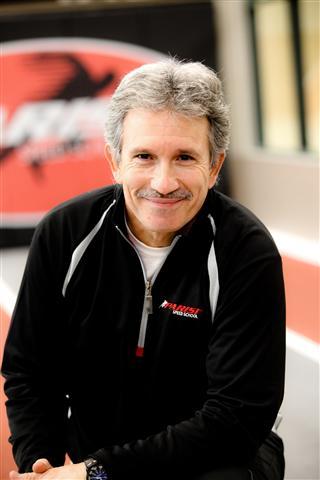 Stubbs is a well-recognized and highly-accomplished name in the prep football world. He guided his Spartans to three state championships and put together a sensational career win-loss record of 143-40 over 15 seasons at Salmen, from 1987 to 2001.

“We had a lot of good applicants that we’d have been happy with,“ said Riverside Athletic Director Timmy Byrd. “But at the end of the day, it’s not often that you find a perfect fit. And that’s what we feel we have. To get a Hall of Fame coach like Coach Stubbs, we had to be sure we seized the opportunity.”

It began after the resignation of Mickey Roussel, who stepped down in mid-December after 22 seasons at the school. Roussel led the Rebels to three state finals, four semifinals and a 196-82 overall record. Last season, Riverside was 8-4 and reached the regional round of the Class 2A playoffs.

“It was important to make a hire that would represent a positive step and provide stability. That’s something Riverside has been fortunate to have for many years,” said Byrd. “We’ve had a very good coach in Mickey, and the program is in excellent shape. Now, we hope to take the next step.”

Stubbs said that he’d always had a return in the back of his mind, but maintained he wouldn’t do it unless “the absolute right situation” came about.

This was such a situation, he said.

“I visited Tuesday and was very impressed with what I saw,” said Stubbs, who attended Riverside’s boys basketball game against St. Augustine. “I was impressed by the atmosphere and with how the kids on the floor and in the stands conducted themselves. I brought my wife to the game, and on our way home we talked and agreed that this was something worth investigating.”

Stubbs and Byrd both spoke of a shared vision of what the football program would grow into, a vision that Stubbs said was shared by essentially everyone he spoke with in the Riverside community over the past week.

“They want to be the best of the best,” Stubbs said. “And that’s not a pie in the sky idea. It became a no-brainer. And when I sat down with Dr. DiCarlo (Friday), there was nothing left to do but to make it happen. And now the work begins.”

Byrd said that the process “really heated up” on Wednesday, after Stubbs’ initial visit.

“Our school has made a huge commitment to not only our athletic program, but to a concerted effort to make our school the very best,” said Byrd.

He said that Stubbs’ mentality mirrors his own in a lot of ways.

“His expectations align perfectly with mine and our administrations in terms of what we want this to become,” he said. “We want to build a program that’s second to none. And his history … he’s already done it. He knows what the blueprint is and he knows how to execute it.

“To get a coach of this caliber … the chance doesn’t come up often.”

In terms of what Riverside supporters will see on the field next fall, Stubbs indicated that he believes in an aggressive, attacking style defensively — but one that takes calculated risks.

Offensively, he said that it will take time to determine what style of attack is the best fit for his players.

“It’ll be exciting, but we’ll tailor it to what our kids can do,” said Stubbs. “Defensively, there are some things you live and die by. We’ll always be aggressive.

“And special teams, that’s number one on my hit parade. That’s something we absolutely can control ourselves.”

Stubbs said that Curtis is where Riverside wants to be; at the same time, he stresses, a Curtis obsession can’t take over the season.

“It’s one week of a 52 week year,” said Stubbs. “Of course we’re excited to have the opportunity to compete with a team of that caliber, in our district. But it’s one week.