Some in St. James want school to stay put 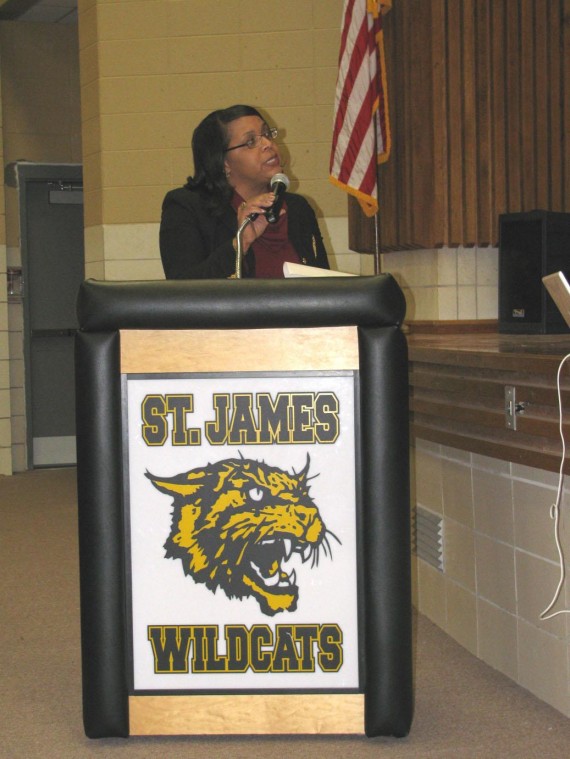 ST. JAMES – A sea of red shirts in the auditorium at Tuesday’s meeting of the St. James Parish School Board Tuesday at St. James High School signified the presence of dozens of members of the area’s civic group, Humanitarian Enterprises for Loving People of the Fifth District, or HELP.

The group has been upset lately over the handling of the proposed land acquisition near the intersection of Louisiana highways 3127 and 20 for the purpose of building a new stadium and perhaps high school away from the impending industrial growth in the St. James area.

Elaine Grant, a representative of HELP, said, “They refuse to look at the people’s demands. They can’t do it without us.”

“This is a historical place,” said Grant. “They’ve taken enough from us already. They’re trying to take everything away.”

Patricia Schexnayder, who represents the Fifth District on the school board, backed the group members in their assertions and got into a heated exchange with Board President Charles Nailor over the group’s exclusion from the agenda.

According to St. James Parish School Board policy, anyone wishing to be added to the agenda must fill out a card and return it at least 30 minutes prior to meeting time. According to Carolyn Weber, secretary to the superintendent, no cards were returned in time on Tuesday. There was, however, a function taking place in the auditorium until about 15 minutes prior to meeting time, so it is possible the group waited until its conclusion to look for the necessary cards, which were picked up already.

Nailor defended the board’s position regarding the relocation of St. James High School and its stadium.

“The majority of growth will be toward Highway 20 in Vacherie,” he said.

He added that while it is not technically necessary to have a buyer for the school’s current site to begin making plans for the relocation of the high school, doing so would make sense in that the board would be able to get a better price for the property than if it began construction before selling.

This matter presented just the first clash between Schexnayder and her fellow board members Tuesday. She also objected strongly to the board’s decision to accept as a new hire Jessica Thomassee in the position of administrative assistant to the superintendent, saying the board had never formally accepted the job description for the new position in the first place.

When the position was originally presented to the board last year, it was pulled from the agenda before a vote could be taken, and Schexnayder contended it had never been put back on an agenda for approval.

“I vote ‘no’ until you show me when you put this back on the agenda,” she said, adding after the board’s approval, “This is illegal, and I will contact the federal prosecutor.”

After the meeting, district administration provided a meeting agenda addendum for the Dec. 13 meeting that showed the position was on the agenda for that meeting.

Lastly, Terry Gros, assistant principal at St. James High School, presented the board with data concerning the effect of the Positive Behavior Intervention and Support Program at the school.

The program, which focuses more on rewarding positive behavior than punishing negative behavior, has resulted in a nearly 50 percent reduction in disciplinary actions on the seventh- and eighth-grade levels.

While the effect has not been so dramatic in the upper grades at the school, grades nine through 12 have also seen reduced disciplinary action.

“Are we improving? Yes. Are we where we want to be? No,” said Gros.