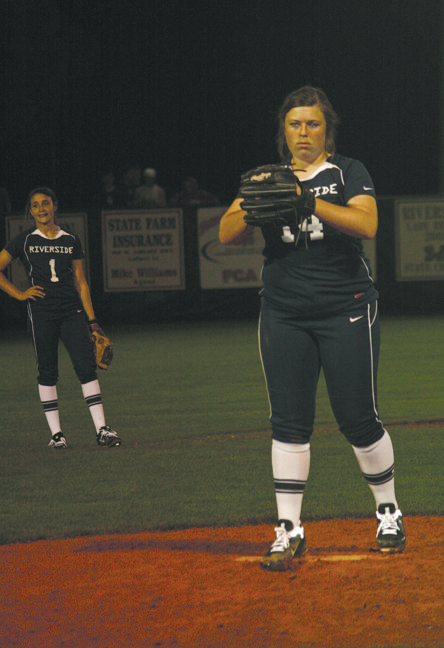 RESERVE — Riverside pitcher Destin Vicknair admitted that she and her Rebel teammates got off to a slow start in Thursday’s preseason jamboree. But by it’s end, the Lady Rebels flashed plenty of the ability that they showed a season ago in a run to the state semifinals.

The Rebels fell to Mount Carmel, 2-0, to open its jamboree action, but rebounded to defeat Dominican by that exact score.

“In the first game, we weren’t very productive with our bats,” said Vicknair, also the team’s three-hole hitter. “We were going three-up, three-down … but I felt like we played a lot better in the last game, that we got our timing down.”

She’d raise her game on the mound as well; Mount Carmel collected four hits and walked twice against the Rebel junior, while she struck out three Cubs; Vicknair tossed a no-hitter in her three innings against Dominican, striking out five and walking two.

Riverside got their runs against Dominican in the first inning after back to back bunt singles by Taylor Terrio and Toni Hebert. On Hebert’s, a Dominican throwing error to first base allowed Terrio to score and Hebert to reach third. Vicknair drove her in on a sacrifice fly to make it 2-0.

Dominican had two on after two walks in the second inning, but the Rebels got a ground out with two outs to end the threat. Vicknair pitched clean innings in the first and third to earn the win.

Riverside coach Kristy Hebert said the day’s start reinforced what she and her players had talked about in the days leading up to the jamboree.

“I was a little disappointed in how we came out against Mount Carmel,” she said. “Given how we’ve been swinging the bats in our scrimmages, I thought we’d have started off faster. But that proves the point that, like we said after the last scrimmage, you can’t be satisfied. You’ll have your good days and your bad days, but you have to keep working and pushing. In the second game, we came out and executed like we needed to.”

Bonnabel won the first meeting between the teams at Bonnabel on Jan. 20, 44-43.

“They beat us by one last time. It’s just a rivalry,” said Haynes. “We all know each other. You know me, I know you, and we’re gonna see who’s the best tonight.”

Said ESJ coach Jackson Manuel, “A lot of the players are friends with one another. They know each other well. They play with and against one another during the summer.

“It’s like going against your brother or your sister in a lot of ways. You won’t surprise the other.”

East St. John led by as many as 14 at one point, but Manuel pointed to some sloppy play, particuarly in the third quarter, as a factor in the lead slipping away.

But it was corrected in the fourth. Haynes’ shot, in particular, Manuel said came in the flow of the offense.

“We had good ball reversal and got her a good look. She got to the spot, and that’s a shot she can definitely make consistently,” said Manuel.

Kanitra Lee led the Wildcats with 18 while Haynes added 14.

When ESJ has two scorers really going, Manuel said, his bunch is a tough team to beat.