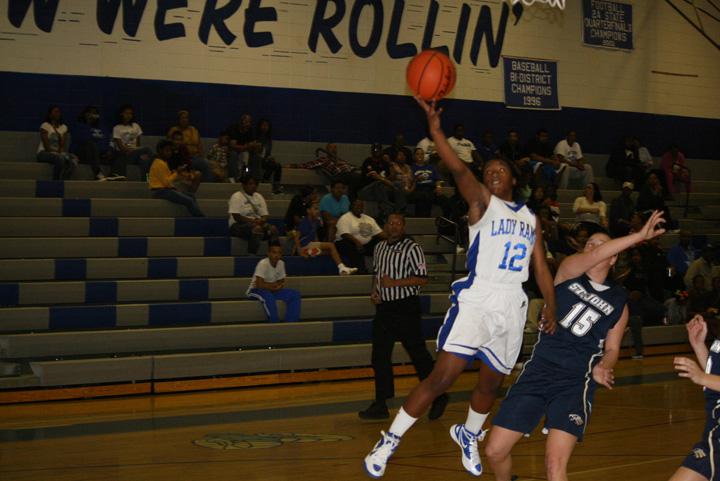 EDGARD – The most dominating regular season in West St. John history officially came to a close Friday night, the Lady Rams making history in the process.

Maya Trench scored a game-high 25 points to lead West St. John to a 67-28 District 9-1A victory over Ascension Catholic, a win that sealed a 10-0 district record and the first undefeated district championship in the history of the school.

The win was the Rams’ 16th straight, a school record. The 23 regular season wins are also the most in school history, and four its fewest losses.

“A lot of former players came out to show their support, and others who couldn’t be there got in contact,” said West St. John coach Lester Smith. “People who have stuck with our program … it means a lot to everyone.”

But Smith said that he believes his players are maintaining their focus on the task ahead.

“I think they realize that while this was always a goal, and it’s a good one to achieve, they still want to play for the state championship,” he said. “We’re five wins away from what’s really our the ultimate goal.”

Smith noted that the Bulldogs were shorthanded due to injuries, and that in part enabled the Rams to build a huge lead early and play their reserves late.

“We were able to get some of our younger girls playing time. That was good for the kids,” he said.

White Castle kept within relative striking distance in the first half, trailing 19-12 after a quarter and 27-14 at halftime. But from there the Rams got going, outscoring White Castle 22-7 in the third to open things up.

“We got our offense on track in the third, and once we got that going it became a momentum thing,” said Smith. “It was their senior night and we knew they’d come out and play with emotion early. We had to kind of weather that.”

Smith and his team will learn their playoff matchup this week.

Like last year, the Rams will almost assuredly have a chance to host games through the first two rounds with a high seed forthcoming. That plan was upset last year, though, when No. 23 seed Ringgold pulled off an upset in round one, hosted the Rams in the regional and then felled the Lady Rams.

This year, Smith feels his team is more prepared, regardless of venue.

“We’d like to host two, to showcase everything to the local fans,” said Smith. “We feel going in that we can make some noise this year.”