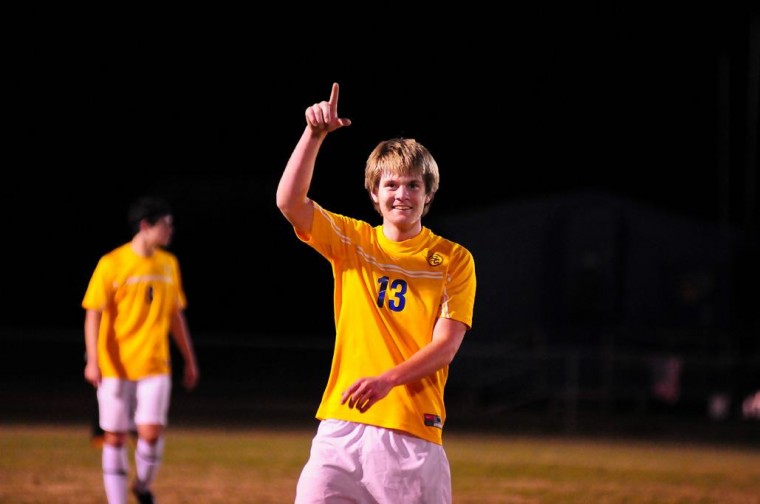 LAPLACE — It was easy enough to St. Charles soccer supporters to forsee an encore performance upcoming, as for the second straight playoff game the Comets were deadlocked in a scoreless tie with a higher seeded foe at halftime.

But there would be no upset victory in LaPlace on Wednesday evening, as University scored twice within the first 11 minutes of the second half and held off SCC from there for a 2-1 regional round victory in a Division III boys playoff game.

The No. 22-seeded Comets had advanced to the regional game with a 1-0 upset win over Loyola on a late goal by Patrick Juneau. Things seemed to be playing out in a similar way on Wednesday; University controlled the ball in St. Charles territory but was continually unable to put home a score against a Comets team that entered with a defensive mindset.

“The game plan for us was to keep it 0-0, as it was at Loyola,” said St. Charles coach Paul Shenton, who completed his first season as Comets’ coach. “In that game, they got frustrated, kept pushing players, pushing players, and eventually we scored on the break. Tonight, they get two goals in 10 minutes after halftime … this wasn’t a team that we wanted to chase.”

That changed just three minutes into the second half, however, as Tapper Patrick got loose and converted a pass inside the box into a score to make it 1-0 in U-High’s favor.

The Comets would not roll over, though. Albert Hane pulled the Comets within a score with 13 minutes left, squeezing a close shot through coverage for a goal.

But University was able to keep the Comets from getting a truly clean shot off for the remainder of the night, and held on to advance.

“It’s difficult to play from behind against a team like this, because they can send it back 70 yards and completely reverse the field,” said Shenton, referring to the kicking power of some U-High players.

He praised his team, however, for reaching the regional round and gelling together after some early season struggles.

“We didn’t win one until Christmas,” said Shenton.

“Just to be within minutes of the quarterfinals, it’s an achievement for everyone involved with our program.”