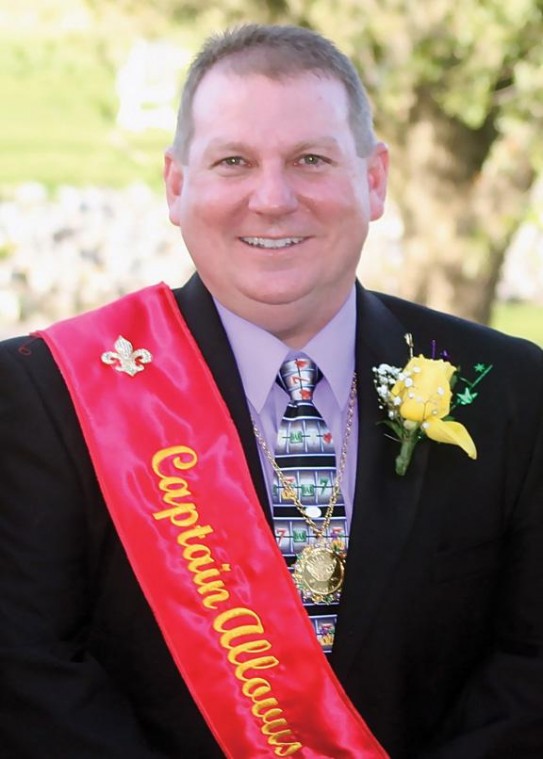 “Allovus Rolls the Dice” is the theme for the 47th annual Carnival ball, which will be held today at St. Charles Catholic High School at 7:30 p.m.

King Allovus XLVII, Michael C. Reine is married to Alisha Heltz. They reside in LaPlace with their two girls Shelby and Macie. Macie will serve as a Royal Page to her father, King Allovus XLVII. Reine is a life long member of the organization and he has served in various aspects at Larayo. He enjoys horse competitions with his girls and many sporting events.

Captain Steven P. Montz is married to the former Dolores Berthelot. They live in Reserve with their two children, Kaylyn and Braedon. Montz has been active in the Larayo organization for many years. He coaches his children and is the boy’s director.

Duke Heath Hotard is married to the former Rachel Dutreix. They reside in LaPlace with their two children, Emilie and Michael. Hotard has been a coach for the girls’ softball teams for the past five years and boy’s T-ball coach for the past two.

Duke Gary Breaud is married to the former Dana Ramir. They reside in Reserve with their three children, Dustin, Rianna and Sierra Lynne. Breaud has been a life-long member of the Larayo organization. He coaches his daughters in softball.

Duke Robert “Bob” Jackson is married to the former Lisa Brady. They live in LaPlace with their children Elizabeth and Luke. Their son, Josh, is in the armed forces stationed over seas. Jackson has been on the board for many years at Larayo. He is the regional operations manager for Stericycle.

Duke Scott Simoneaux is married to the former Rebecca Acosta. They live in LaPlace with their children, Evan and Eden. Simoneaux coaches his daughter’s softball team and works at Marathon in Garyville.

Queen Marie Carmen Cupit is the daughter of Andrew and Helena Cupit of LaPlace. The Cupit family has a deep tradition of Allovus royalty. She was a page to her father, King Allovus XXXI. Her sister, Kelly Cupit Hubbel, was Queen Allovus XLIII. She played softball and swam many years for Larayo. She is a graduate of LSU. She is currently working on her MBA at Loyola.

Maid Kaila C. Klibert is the daughter of Ronnie and Cindy Klibert. She was a member of the swim team for 12 years. She has also coached for the past two years and will be coaching this summer as well. She played softball for six years. She is a student at Southeastern in Hammond.

Maid Carly A. Trepagnier is the daughter of Morris and Amy Trepagnier of LaPlace. She played softball and was on the swim team. She also worked at Larayo as a lifeguard. She is a student at Southeastern University in Hammond.

Maid Chelsie L. Cupit is the daughter of Stephen and Julie Cupit of LaPlace. She is a Junior at Riverside Academy. She is very involved at school. She played softball for 10 years, has been on the swim team for 12 years and is now a lifeguard. Her father was Captain Allovus and a Duke. Her cousin Marie is Queen this year.

Maid Emilie B. Boucvalt is the daughter of Jobe and Esther Anne Boucvalt. She comes from a long line of Allovus Royalty, following in her father’s footsteps. He was a Duke and also King of Allovus. She is a sophomore Ursuline Academy in New Orleans. She played softball from T-ball to 9-10 and swam from first grade to seventh grade.

King Allovus XLVI is Richard Klibert of LaPlace. He and his wife Suzanne have three children and three grandchildren. Klibert has served in many capacities as a Larayo member.

Queen Allovus XLVI Amanda Miller is the daughter of Lynne and Tim Miller of LaPlace. She is a graduate of U.N.O. and is currently working as a salesperson for a pharmaceutical company.