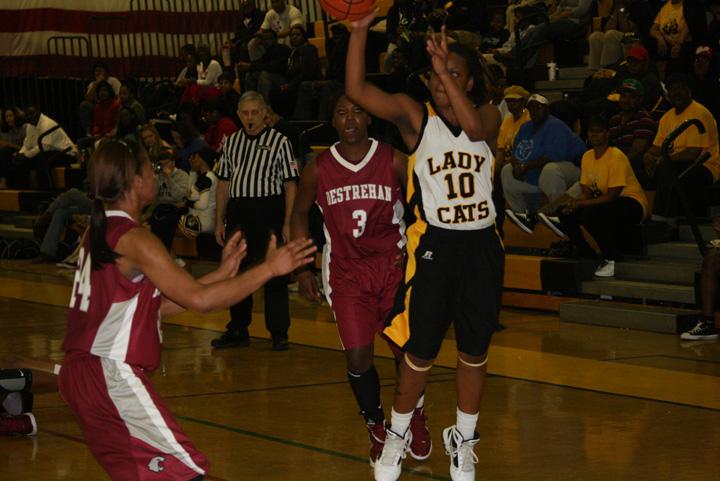 RESERVE — Brishane Haynes’ shot with just under a minute left proved to be the winning points for East St. John Tuesday night as it secured a 52-49 victory over visiting Bonnabel.

Haynes’ scored just outside the lane to put her team ahead 50-49.

“I just knew we needed the lead,” said Haynes, a junior. “We had to take it and run with it. We didn’t want them to have a chance to do it to us.”

Bonnabel would add a free throw, but would not score again. Bria Joseph converted two free throws for East St. John with 2.9 seconds left and Bonnabel wouldn’t get off another shot before time expired.

ESJ led 26-22 at halftime, but only brought a one-point lead into the fourth quarter.

Bonnabel won the first meeting between the teams at Bonnabel on Jan. 20, 44-43.

“They beat us by one last time. It’s just a rivalry,” said Haynes. “We all know each other. You know me, I know you, and we’re gonna see who’s the best tonight.”

Said ESJ coach Jackson Manuel, “A lot of the players are friends with one another. They know each other well. They play with and against one another during the summer.

“It’s like going against your brother or your sister in a lot of ways. You won’t surprise the other.”

East St. John led by as many as 14 at one point, but Manuel pointed to some sloppy play, particuarly in the third quarter, as a factor in the lead slipping away.

But it was corrected in the fourth. Haynes’ shot, in particular, Manuel said came in the flow of the offense.

“We had good ball reversal and got her a good look. She got to the spot, and that’s a shot she can definitely make consistently,” said Manuel.

Kanitra Lee led the Wildcats with 18 while Haynes added 14.

When ESJ has two scorers really going, Manuel said, his bunch is a tough team to beat.

“I definitely think so,” he said. “That’s what we look for.”