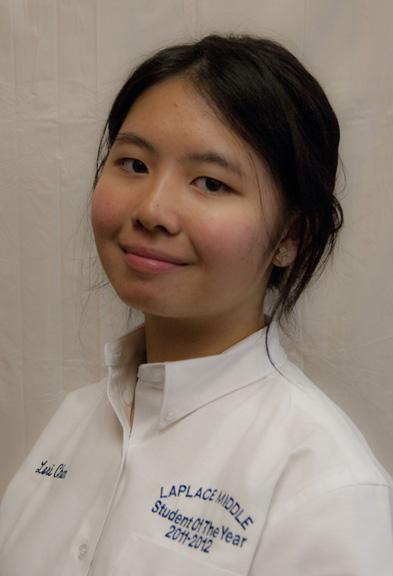 RESERVE – The St. John the Baptist Parish School Board has announced the district’s winners of the 2011-12 Student of the Year awards.

The students were selected based on academic achievement, school and community service, recognition and leadership, portfolio presentation and written and verbal communication skills.

The top students who were selected will compete for regional honors in the coming weeks, in hopes of advancing to the state competition, which is sponsored by the Louisiana Department of Education. The top three winners and the district-wide nominees will be honored at the Feb. 16 St. John Parish school board meeting.

“All the students nominated for the award presented outstanding portfolios and conducted great interviews, representing themselves and their schools very well. This year’s judges had a very difficult time selecting the top three winners,” Heidi Trosclair, chairperson of St. John Parish’s Student of the Year competition, said.

Rainey is very active in school clubs and activities, and he has won numerous academic and athletic awards. He currently serves as president of the Student Council, captain of the Mock Law Debate Team, senior reporter newspaper, a board member for the St. John 4-H Advisory Board, reporter for his school’s 4-H Club and a delegate for the 2011 Louisiana Youth Seminar.

Rainey said he plans to attend college to pursue a degree in zoology or environmental science in hopes of becoming a research scientist. He is the son of Lester Rainey Jr. and Arnita Rainey, both of Edgard.

Chen has received much recognition for her talent as an artist. She has won numerous awards for her artistry, including the 2011-2012 St. John the Baptist Parish School District’s Christmas Card Contest. She is an “A” Honor Roll student, and she serves as treasurer of the Junior Beta Club.

She said her sister has had a tremendous influence in her life, encouraging her to read novels and giving her advice and support. Chen is the daughter of Zhao and Ling Chen of LaPlace.

Cornish has maintained an outstanding academic record at LaPlace Elementary, earning honor roll status every year since kindergarten. She also scored Mastery in three of the four categories on the fourth grade LEAP exam.

She recently attended a Charm and Modeling Camp, earning a certificate for being a camp mentor. She is member of her school’s 4-H Club, and she enjoys tutoring younger students at her school in math. She is the daughter of Albert Jr. and Andrea Cornish of LaPlace.

“We are very excited to announce this year’s top students, and we congratulate all our nominees who earned their school’s Student of the Year designation,” Superintendent Courtney P. Millet, said.

The other senior nominated for the 2011-12 Student of the Year award was Bianca Cook of East St. John High.