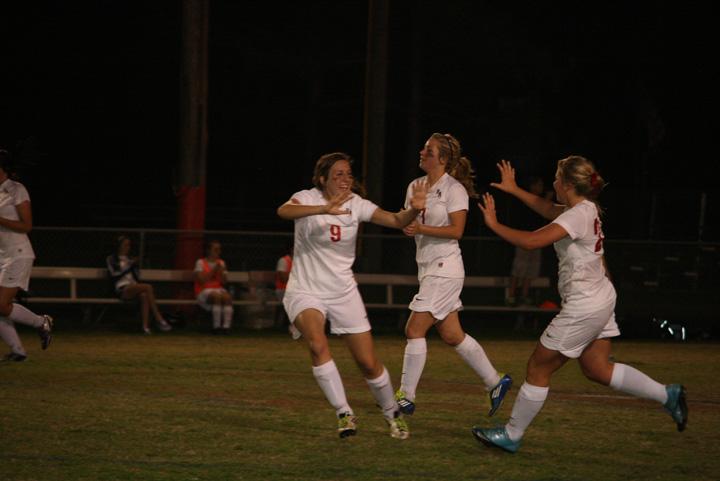 RESERVE — For Riverside, Thursday night represented a chance to take the biggest step forward yet in what has become the breakthrough season of its girls soccer program. For St. Charles, it was a chance at redemption after being swept by the rival Rebels for the first time ever.

Both teams, both rivals, had much to play for. Thursday’s playoff matchup certainly reflected it.

But in a match that certainly goes down as one of the most memorable in the history of St. John Parish, Riverside’s 4-3 Division III bi-district victory sent the Rebels to the regional round of the state playoffs for the first time in school history.

Riverside, the 12th seed, will travel to face fourth-seeded Catholic-New Iberia in the regional round.

Jordan Duhon and Shelby Deslatte each scored two goals for the Rebels.

“It feels great. Nobody has done it before here … We made history tonight,” said Duhon.

Said Riverside coach Stephen Millet, “The intensity was there on both sides tonight. And we knew it would be. It’s very difficult to beat a team three times in a season … This is a huge win for our program, for those that have been a part of it in the past, present and future.”

Laura Hane scored two goals for the Comets and Lauren Sherman scored another.

Riverside struck first nine minutes into the game when Duhon shot high and into the upper left portion of the Comets’ net, putting the Rebels ahead 1-0.

St. Charles answered in the 26th minute when Hane got loose and behind the Rebels’ defense. From the middle of the field, she tied the game by hitting just inside the left post. The teams went into the half tied 1-1.

Much like she did in the first half, Duhon scored quickly in the second. This time it took just seven minutes for Duhon to score and put Riverside ahead 2-1.

The teams’ goaltenders then took turns denying the other team in relative succession. St. Charles‘ Shelby Schneider dove to deny a potential goal by Deslatte with 26 minutes left to play; seconds later, Riverside’s Kori Bourgeois denied Jalynn Johnson with a stop of her own.

With 19:30 left on the clock, perhaps the match’s most memorable — and pivotal — sequence occurred. Hane was fouled about 20 yards away from the goal and earned a free kick. She sent one high and just out of Bourgeois’ reach into the upper-most part of the net to tie the game.

“Tonight, our girls didn’t give up. This performance was representative of who we are, more than those others were,” said SCC coach Don Peyton.

But Riverside seized the momentum right back from the Comets. Less than a minute later, Deslatte got control of the ball and drove deep into SCC territory, scoring on a shot from the right side of the goal to put RA back ahead.

“You just get mad,” said Deslatte. “They scored to tie it, but we didn’t want to be tied. We came out here to win and we were determined to get it back.”

Eight minutes later, Riverside got an insurance goal on the combined efforts of Duhon and Deslatte; Duhon got the ball on the right side of the field just outside of the goal and quickly crossed it to Deslatte, who popped it in from point blank range to make it 4-2.

With six minutes left, St. Charles rallied to within a goal when Sherman fired and converted to draw SCC within one.

But the Rebels were able to kill much of the remaining time with possession in Comets territory. SCC could not get a strong shot off.

“You could tell by their attitudes coming in,” said Millet, “that they weren’t going to be denied.”