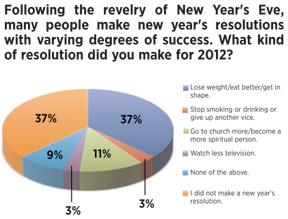 LAPLACE – The onset of the new year comes with the tendency for most people to make a commitment with themselves to do something better than in years past. Most people resolve to make an important lifestyle change in their health or well being, while others just resolve to be a better person intellectually or spiritually.

Last week, visitors to L’Observateur’s website were asked what sort of resolutions they planned to commit to for 2012.

A complete breakdown of the results is as follows:

• 3 percent of respondents chose “Stop smoking or drinking or give up another vice.”

• 9 percent of respondents chose “None of the above.”

• 37 percent of respondents chose “I did not make a new year’s resolution.”