Local veterans anticipate the proposed erection of a new war veterans home in the New Orleans area, a location currently in competition with two other areas of the state as site of the new facility.

Should the New Orleans area be selected as the location of the new veterans home, the facility would draw veterans from LaPlace, Covington, Slidell, Gretna and elsewhere in the metropolitan area.

According to David Perkins with the Louisiana Department of Veteran Affairs, southeast Louisiana, including the New Orleans area, is vying to house the veteran complex against the Shreveport area in the northwest and the Acadiana area in the southwest.

“We’re not concerned with which city, but rather with which area is best for the veterans home,” Perkins said. “Although we would like to put aveterans home in each location, in the near future we can only see funding for one home, not three.”Perkins said the governor is going to appoint a committee by executive order to study and give the governor’s office a recommendation as to where the next home should be located, and the committee will determine the criteria by which to prioritize selecting the location of the next home.

“It would be wonderful to have a veteran home nearby, and it would be so beneficial to veterans in this area,” said Alden Clement, commander of the Veterans of Foreign Wars Post 5004 in Reserve. “I wish they could get itbuilt.”With only two veteran home facilities currently in Louisiana – none in southeast Louisiana – family members of area veterans must travel to these locations for visitation purposes, which can be a tedious task for an elderly wife, friends and family members, Clement said. A veterans homein the New Orleans area would make visitation more convenient, he said.

“If someone has family who wants to visit them, they won’t have to travel a long ways like they do now,” he said.

“This would be a home strictly for war veterans, and it’s a good service,” Firmin said. “It’s fantastic, and you know this if you’ve ever seen theother veteran homes.”The proposed facility would serve as a retirement home for healthy and ill veterans, providing them with nursing home care as they age at a cost lower than that of a nursing home.

“All the parishes around here have a lot of veterans that need help,” Firmin said.

While the number of veterans in each area will probably be a factor that the committee takes into consideration, Perkins said, “it will not be the only criteria.”Should the New Orleans area be the selected location, St. Bernard Parishand the west bank of Jefferson Parish are two possibilities under state consideration.. 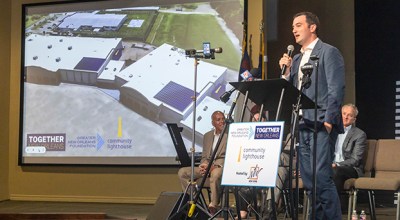 $1 million grant will turn New Wine into a Community Lighthouse, keep power on during disasters