LAPLACE — The crowd was painted green as Tulane University made history with an unbelievable comeback to claim the Cotton Bowl title after trailing by 15 points to the University of Southern California in the final five minutes of the game. Among the members of the triumphant Green Wave team were young men born and raised on the tradition of River Parish football.

Cornerback Jarius Monroe, an East St. John High School alum, made one of the biggest plays in the first half of the game with an interception from USC’s Mr. Heisman, Caleb Williams.

Monroe’s older brother, Darion, also played for the Green Wave. However, Tulane was not Monroe’s first stop after leaving ESJ as a three-star prospect and a top 45 player in Louisiana. He spent his first college seasons at Nicholls State, where he made a name for himself as a starting cornerback. 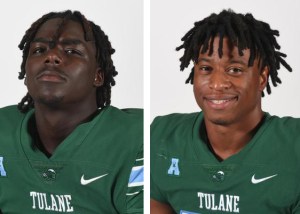 Jarius Monroe and Mandel Eugene are two players from St. John the Baptist Parish on the Tulane University football team. Photos from tulanegreenwave.com.

“I transferred over to Tulane for an opportunity to play against better competition, which I have gotten a chance to do,” Monroe said.

During the 2022 season, Monroe had a total of 49 tackles, including a season high of nine against Tulsa in November. He said the Cotton Bowl was an experience like no other, and he credited the game-changing interception to effective teamwork and preparation.

“It was a play we’ve worked a lot and practiced. I did my job and my teammates did their job, which put me in the position to be able to make a play,” Monroe said. “The atmosphere was amazing. We had a lot of fans there, a lot of excitement and tears. Everybody was really happy. It was probably one of the best experiences I’ve ever had in my life.”

Coming out of East St. John, Monroe felt he had to do a lot of growing on his own at the time. Although he had some great coaches and defensive coordinators along the way, what he missed was a sense of stability during those formative years.

“I was only able to get Coach Brandon Brown for one year. He’s a great coach, and he’s developing those guys over there in an amazing direction. In the one year I dealt with him, I felt like I developed the most into what I want to be going into college,” Monroe said.

Moving forward, Monroe hopes to continue spreading positivity through football and do his part to build a platform that can make the world a better place.

Eugene, who helped the Comets reach the Division III championship game as a high school senior in 2020, was part of Tulane’s defensive scheme this year in games against Alcorn, Southern Miss and UCF.

He said coming from St. Charles Catholic prepared him well, as his former high school coach Frank Monica and Tulane Coach Willie Fritz share the same love for special teams. According to Eugene, the main differences between the high school and college level have been the playbook and the speed of the game.

Eugene will never forget the rapidly changing emotions during the last drive of the Cotton Bowl, from the hard blow of the last touchdown play initially being called incomplete to the joyful celebration that followed.

“Of course, every game we go into, you’re expecting to win, but once we got there and all the different events we had, everybody locked in, and I think that played a big part. During the game, nobody gave up, everybody stuck together, and we kind of just fought our fight,” Eugene said. “It was great because you still felt the energy from the crowd even without the fans on the field. At the same time, it was kind of bittersweet, at least for me, because I was close with all of the seniors.”

Some of the seniors who have been most impactful to Eugene’s journey are Dorian Williams, Nick Anderson and Macon Clark.

Clark also started his athletic journey in the River Parishes as a native of St. Rose and a graduate of Destrehan High School. After earning Class 5A all-state first team honors and being named first team all-district MVP at DHS, Clark started his first season at Tulane in 2018 and appeared in 12 of 13 games as a true freshman. By 2021, he was the team-leading tackler with a total of 74 for the season.

Clark had five tackles during the Cotton Bowl, including three solos and two assists, contributing to a total of 68 tackles for the 2022 season.

Taliancich has held Tulane season tickets since he was 6 years old, long before he made a name for himself on the football field. He did not appear on the field during his freshman season with the Green Wave, but that quickly changed in 2021 when he became part of an O-line that averaged more than 164 rushing yards per game. This year, he had a season high of four tackles against Kansas State.

Prior to arriving at Tulane, Friloux totaled 55 solo tackles and 105 assisted tackles across 12 games at Hahnville in 2019, earning first-team all-conference honors for his senior season. He appeared in 10 games during his first season with the Green Wave.

Jackson, the nephew of Ed Reed, received college offers from West Virginia, Kentucky, Memphis, SMU, Navy and Houston before landing at Tulane for the 2019 season. He has established himself as a versatile offensive powerhouse and ended the 2021 season with just over 1,000 all-purpose yards. Now a junior, he had a season-high 87-yard reception as well as a receiving touchdown against Southern California in the Cotton Bowl.