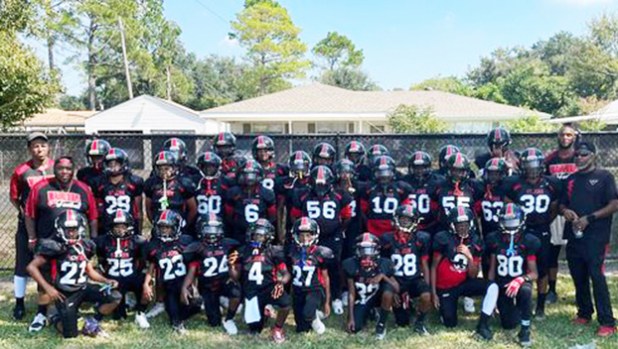 The kids on the 11/12 team got their first taste of a championship with a recent Super Bowl win. 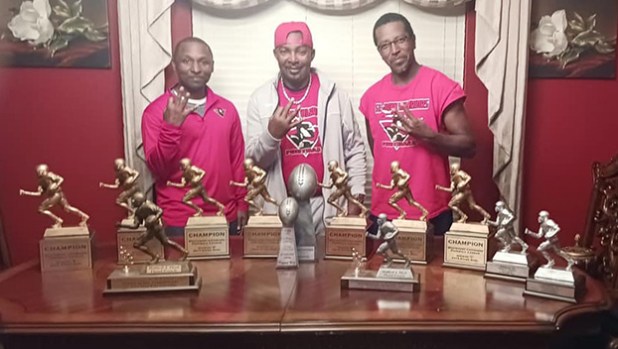 St. John Warriors Red coaches Rob Williams, Brian “K.B.” Armstrong and Raffeal Neal stand behind all of the trophies the program has earned across age divisions.

LAPLACE — To have three age groups from the same youth organization win the championship is a momentous accomplishment unheard of in the Southeast Louisiana Football League for the past 20 years. The St. John Warriors Red did just that, making history with Super Bowl wins from the 7/8, 9/10 and 11/12 age divisions.

The championship was especially rewarding for the 11/12 team, as many of the boys have been part of the Warriors Red program since they were 5 or 6 years old and have always fallen short of winning the Super Bowl.

This year, they clutched the victory against cross-town rival St. John Warriors Gold. It was a moment of redemption after a difficult loss to the Gold earlier in the season.

“The 11/12 year old team was to me a special team because they’ve been around other kids winning since they were 5/6, but they were always the team that never really won or finished strong. They were always kind of the bridesmaid but never the bride,” said Coach Brian “K.B.” Armstrong. “This year was their year.”

After earning the title, some of the kids told Armstrong, “We really are great.” He reminded them that they’ve been great all along for coming back year-after-year and never giving up. In the process, football and wins and losses are all secondary to the main mission of building boys into great men who know how to work together.

This year has not been without challenges. On a personal note, the Warriors Red program was shaken last year by the passing of two coaches who were integral to the continued success of the program.

The boys rallied together, as did the coaches, and this year started off strong for the 11/12 team with an undefeated record. That momentum seemed to come to a halt when the Red faced the Gold for the first time in a Bayou Classic style match-up. After the kids heard taunting at school in the days leading up to the game, Armstrong could see it in their eyes that they weren’t going to win.

“I had to give them a big speech. I asked them if they want to be remembered as the kids who couldn’t finish a game or the kids who would still be legendary no matter what happened in the past. When we came against the Gold again in the Super Bowl, we just dominated. We were like a whole different team,” Armstrong said.

The championship was a turning point for Christopher Becnel Jr., a big Cam Newton type quarterback who had to break through his fear of facing rival quarterback “Stankyman” on the Gold team.

“The kids had a great year. It let me know as the leader of the program that we’re doing something right,” Armstrong said. 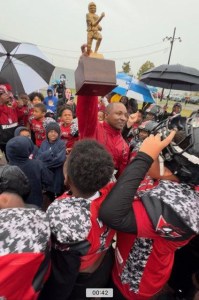 Of the three championship Warriors Red teams, the 9/10 team was the only one to earn a second consecutive championship in 2022. Coach Rob Williams said the kids were able to build upon the success of last year with a mix of returning and new players.

Participation improved over last year as families returned to the area following Hurricane Ida, and this season provided far more time for the coaching staff to work with the kids. Time and attention to developing each player allowed the team to go undefeated across 10 games this year, including seven regular season games, two playoff games and a 14-8 Super Bowl win against the Clinton Tigers.

Akeem, Kier’Rhon, Bradley, Armani, Jaycob and Floyd were among the returning athletes this year. Others, such as Miguel, missed last year due to Ida but came back full force in 2022.

Williams got to witness some big moments this year, such as watching newcomer Charles “C.J.” go from running away from contact at the beginning of the season to starting in the championship game. According to Williams, Braxton showed amazing perseverance for coming out and making his mark while mourning the loss of his father, Coach Campbell.

With the team now having back-to-back championships to tout, Williams plans to stick with the formula that has proved to be successful.

“It’s been a little bit of a challenge, but we try to tell our parents to trust the process. Discipline, responsibility and taking accountability at this age is very important when it comes to team sports. I’m a veteran of the U.S. Army, so I really believe in those principles. We build up to football, but we start with respect for authority and adults. Respect for ourselves, and trying to do things right,” Williams said. “We aren’t going to be happy with doing things right once or twice. We’re going to do it until we don’t do it wrong. You have to show kids that hard work pays off and make them believe in themselves. Most programs look for the kid who is polished, has hit their growth spurt and who’s bigger and faster than the other kids. We don’t really look for that. Our program is set up so kids learn football.”

Much of the youngest Warriors Red team carried over from last year, according to Coach Raffeal Neal, but this season was an opportunity to write a new ending.

Last year, the team lost a Super Bowl challenge just one weekend before attending the funeral of one of the boys who represented the 5/6 age group with heart. At only 6 and 7 years old, those kids made a commitment to come back and try again in 2022, and they were successful in doing so.

The 7/8 Warriors ended the season with a respectable 9-1 record and the elusive championship title. It all started in September with three shut-out victories against the Clinton Tigers, Baker Jr. Buffs and the D’Ville Tigers. The only loss of the season against the Hammond Jr. Tors was swiftly followed win three wins against the Eastside Raiders, Tangi Cubs and the St. John Warriors Gold to close out the regular season.

The Red won against the Warriors Gold again in the first round of the playoffs, 28-0, and advanced to the semifinals, where they earned a 16-7 win against the Baker Jr. Buffs. The Super Bowl game was an outstanding defensive battle that culminated in a 6-0 win against the Tangi Cubs on November 19.

Neal is proud of the coaching staff, David Flournoy, Joseph Marshall, Mike Pettit, Paul Celestein and Patrick Compton II, as well as all of the boys who can now call themselves champions:

Neal gives special props to Nyheem, who returned this year as a phenomenal 8-year-old running back after having to relocated to Texas last season following Hurricane Ida. Another major factor this year was Zaiden, one of the youngest players Neal has ever witnessed calling his own plays in the huddle.

Most of the boys will move up to the 9/10 team next year.

“I just love their perseverance. I love that they bought into the team concept. It grows with them as they move on through the organization,” Neal said.