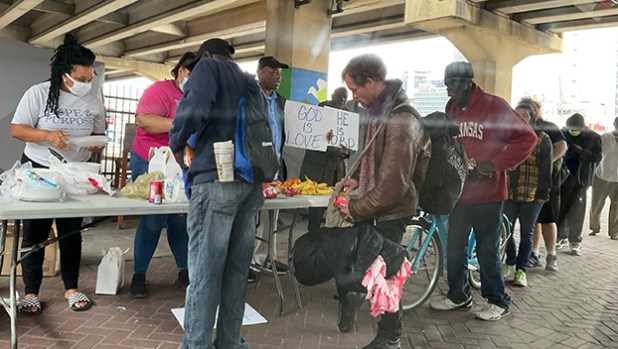 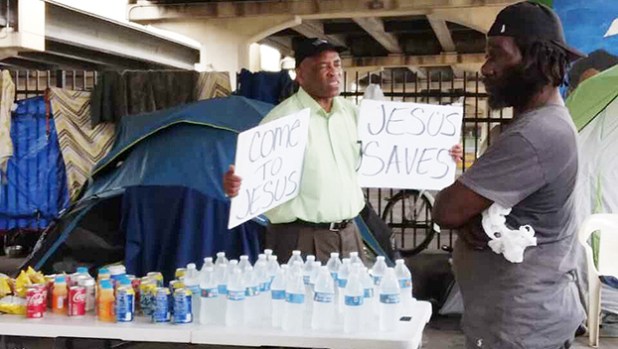 The Rev. Byron Clay of LaPlace believes the greatest love of all is giving oneself to serving others. 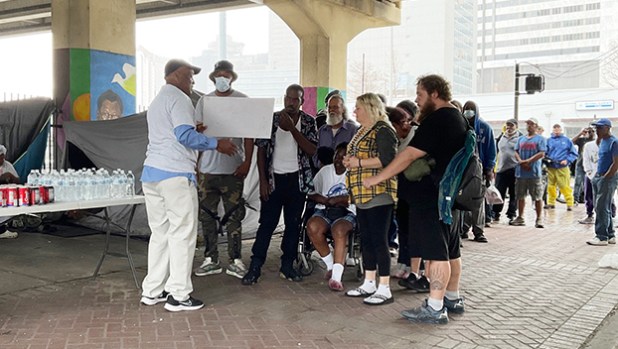 After setting up, the Rev. Byron Clay always takes 10 to 15 minutes to minister to the homeless population.

NEW ORLEANS — The Rev. Byron Clay believes that real love is an action, not a feeling, and the greatest love of all is giving oneself to serving others.

During the COVID-19 pandemic, Clay began traveling from LaPlace to New Orleans six times a week to feed the growing homeless population congregated in tents under the Claiborne bridge. More than two years later, he is continuing to feed the homeless at least four days a week.

He finds inspiration from 1st John 3:17-18 – “Whoever has this world’s goods and sees his brother in need and shuts up his heart of compassion, the love of God is not in him. We are to love not just in word or in speech, but in deed or in truth.”

“If I can help somebody, then my living will not be in vain,” Clay said. “As we approach the Christmas season, we have a wonderful opportunity to show the love of Christ to others. We live in a world that is characterized by restlessness, meanness, wickedness, violence, racism and hate. A world that is rampant and ruined. Yet, we have the greatest opportunity ever to show the love of Christ.”

Clay is often joined by Oscar Tuco and Justin Harvey, both from LaPlace, and there have been several occasions in recent months where his daughter and son-in-law, Dinez and Louis Walker, have joined in the effort.

One of the most moving and powerful experiences he’s had lately was collaborating with Pastor Dr. Pamela Weston of Royalty Love Christian Church in LaPlace for a Thanksgiving Day distribution. The church family will once again join Clay to serve the homeless on Christmas.

Each time Clay arrives to the Claiborne Bridge in New Orleans, he will set up and then spend 10 to 15 minutes ministering to the homeless population and explaining the plan of salvation. In addition to distributing food, he has also brought along copies of The Bible as well as personal care packages containing toothbrushes, toothpaste, towels, soap, deodorant and mouth wash.

Since the weather has gotten colder, he’s also brought blankets to keep the homeless population warm.

From speaking with the individuals, Clay has met a few people from LaPlace under the bridge, as well as some others from the Kenner and Metairie area. The homeless population in the area seems to have tripled since the onset of the pandemic, without regard to age or race. Clay sees children with their parents, either sleeping on mattresses in a tent or huddled in abandoned cars.

When Clay greets them, he often carries a sign that says, “God is love.” He never worries about the implications of hugging or shaking hands with others, even as COVID, the flu and a host of respiratory illnesses gain traction. He believes God has a special love for those who are homeless and rejected, and that love is enough to keep them safe.

“I want to let them know that no matter what they have done in life, no matter what situation or circumstance they are facing, that God’s love for them is inexhaustible and boundless. He has plenty of mercy to show them,” Clay said. “For me, this is a calling. That’s my assignment from heaven. I do it both out of obedience and because I enjoy encouraging people. I always enjoy trying to lift their spirits and giving them some hope.”

While food donations are covered, Clay said the homeless population is still in need of blankets to get through the winter. Individuals who wish to donate blankets or volunteer time can reach Clay at 504-237-7076.