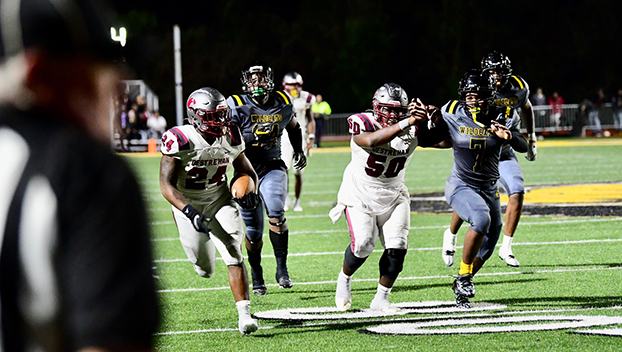 RESERVE — Friday night was an extremely big night for the River Parishes. It was the battle of the Wildcats vying for a place in the semi-finals of this year’s LHSAA football championship.

The Destrehan Wildcats traveled to Reserve to face the East St. John Wildcats, who were seeking redemption for the loss to Destrehan earlier in the season at home. This game, however, would be much closer than the previous, in which Destrehan defeated The E 48-7. Playing where the stakes were much higher, the game remained scoreless throughout the first quarter.

Destrehan drew first blood with a 5-yard touchdown run by Shane Lee to make the score 7-0 early in the second quarter. The E capitalized on a turnover on downs and got on the board from a George Martin 48-yard touchdown run and the field goal was good. The score was tied 7-7 going into the half.

The fourth quarter would prove to be the most exciting and extremely intense, with both teams fighting for the chance to advance to the semi-finals. After Anthony Robinson ran for a 23-yard gain, he fumbled at the 2-yard line, which was recovered by East St. John. The E, after three plays, turned over on downs with a punt that put Destrehan at the 31-yard line, prime position for them to score. And score they did, after four plays Jai Eugene ran in for seven yards to make the score 21-14, and Destrehan was in the lead.

With 4:25 left in the game, East St. John went on a six-play drive that resulted in a touchdown pass from Yasmin Mitchell to Koyal Gray. With the score now 20-21 and Destrehan still in the lead, East St. John attempted the two-point conversion but was unsuccessful, leaving the score 21-20. The Destrehan Wildcats defeated East St. John and advanced to the semi-finals of the 2022 LHSAA football Championship for the second year in a row.

Coach Brown stated in a post-game interview that he felt really good about the play called. He felt that if DHS would have played from behind, it would have given his team a fair chance to win.  He said, “I love our guys, I love our effort. I mean that’s what I asked them to do. I said, ‘Look guys, leave it all out on the field. And they did that, they did that!’”

In speaking with Coach Scott after the game he had this to say, “We knew we would have our hands full this time around playing here (Reserve) again. And we didn’t hit on some early plays which made it a dog-fight. Coach Brown did a great job at being prepared this time around and we knew it would be a tough game.”

The Destrehan Fighting Wildcats will face off against Westgate, on Friday night at 7 p.m. at Wildcat Stadium. Let’s come out and support all of our River Parishes teams advancing to the next round.