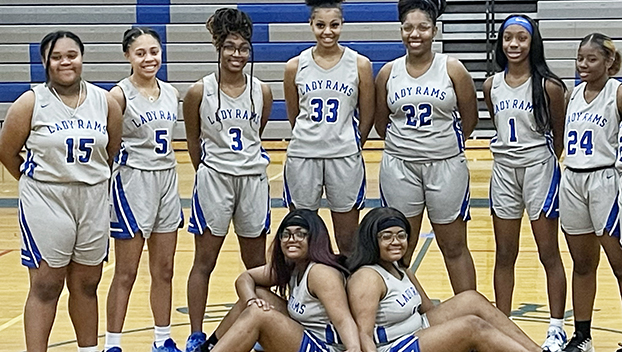 The girls were down 15-7 at halftime before coming back and rallying for the win with stellar defense from Chyna Kinard and impressive ball handling by Kaci Williams. As head coach Shontrice Blanche watched the team come together as one, she saw great promise for a comeback year.

Last season, Blanche was focused on teaching the rules of the game to girls who had very little experience on the basketball court. Now the foundation has been laid, and she sees the system coming together.

“We are coming from a losing season where we didn’t win a game last year. I had a young team of eighth graders, freshmen and one junior who was hurt mid-season, and we had to finish the season without her,” Blanche said. “We were really excited to have the first win in two seasons. Then we came close against Morris Jefferson but lost by two points. Last year, we were losing by 40 or 50 points, so we are doing better this year. I’m proud of them for learning, working hard and hustling.”

This year’s squad doesn’t have a superstar. It’s up to everyone to play their respective important role. As the girls become more well-rounded and develop their skills, Blanche looks forward to giving them more roles and responsibilities.

Chyna Kinard, Sh’rita Baker and Malaya McGee are the defenders charged with keeping the opposing team from reaching the goal. On the offensive side, Indya Williams’ role is to shoot, while twin sisters Kaci and Kori Williams push the tempo and Lenneisha Waxter passes the ball to get the team into a good position. Rebounders Kharma Creecy and Mya Rousseve capitalize on every opportunity to get the ball back into the Lady Rams’ control. Also returning to the team this year is Charlize Rousseve, a talented point guard who was previously out with an injury.

Aside from Creecy, all of the girls on the team this year are freshmen and sophomores. With support from assistant coaches Watkins and Oubre, Blanche believes West St. John has the leaders in place to turn the young girls’ basketball team into a winning program.

“We’re working hard to try to change this program, and we would love for the community to come to the games,” Blanche said. “Each game, we will try to throw either Lady Rams towels or beanies into the stands to thank them for showing their support.”