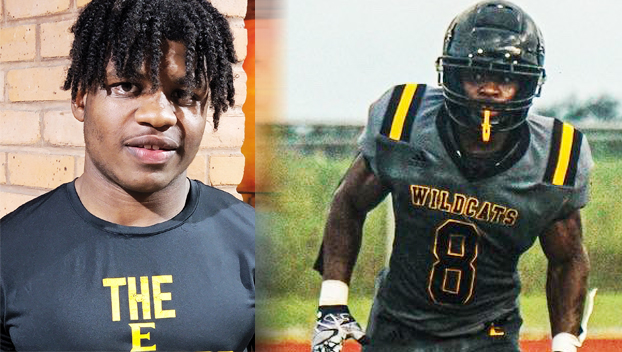 The Nick Network Prep Report recently had a chance to sit down with East St. John’s senior running back class of 2023, Mr. George Martin.

Martin has been on the honor roll since sixth grade, and his hobby is running. He has applied to various colleges, in state as well as out of state. Aside from being an honor student, he participates in the Interact Club as well as the Drama Club.

Martin would like to major in mechanical/aeronautical engineering. If football doesn’t work out, this way he will have something to fall back on.

NNPR: If you didn’t play football, what other sport would you consider playing and dominating in?

George: Track, mostly long distances. I do participate in long distances, however it’s been mostly medium distances such as 800/400 yards, and I’m really a 400 yards type guy. I’ve been running track since I was little. After I finish football, I will prepare for track season. I’m trying to reduce my 400 time. That’s currently what I’m striving to do. I’d like to do 200 yards not and I’d like to become better as a person and be great at any sport I participate in.

NNPR: Thanksgiving is right around the corner, tell me what or who are you most thankful for?

George: My parents, God, my supporters, people that have been supporting me since I was born.  They’ve always wanted to see me do well and I want to live up to their expectations to what they want me to be. So when I go to that next level, whether I’m playing, academics or not, I want to be someone great in life. I want to build a future, like I stated in aeronautical engineering, which is aerospace as well. If football doesn’t work, I want to inspire young people. I want go to a company, to try to build a future for everyone in this world. A world changing item that people can use every day to improve quality of life for everyone, something people can remember me for.

NNPR: Playing for East St. John for four years, give me your most memorable moment.

George: The hard work! The pain…the sweat, the tears. Everything our team has been through since the summer, the downfalls. The memorable moments is proving people wrong!  Our team is a great team and we’re trying to go to the championship. The most memorable moments are just grinding, being in the weight room, being with my brothers.

NNPR: Man, I tell you that is awesome. Because once you put that to bed, that last game, you might not ever play again. It’s the world’s greatest and worst feeling in the world because your never know who’s looking at you. Give me two teachers that have made a lasting impression on your life.

George: I want to say Mrs. Carter from East St. John Prep, and, of course, well she’s not a teacher — she is a principal — Mrs. Gayden from East St. John Prep. Those and Mrs. Chiano. They’ve been there for me since day 1, before I went to school. They changed the person who I am. They formed this athlete, student-athlete that’s a respectable young person, along with my parents. They changed my motives, my commitment, they just changed me as a person.

NNPR: Yes, it still takes a village to raise a child, I can tell you that much. Seems like they’ve done a good job. If you had a choice of holidays other than Christmas, what would it be?

NNPR: Do you have any college offers to play football yet?

George:  As of right now, I do not have any offers to play football, however I know they will come. I know that one college that offers my major will give me an offer and allow me the chance to prove myself. Once they do I will take that and roll with it!

NNPR: If you’re not playing football in college, where would you like to attend?

George: Oh, that easy! My mom would be the glue, and my dad would be the hammer. My mom always keeps the family together, so even in hard times when we’re down or when we’re high, she’s always there supporting me, she’s always giving, she always appreciates everything that I do. She tells us she loves us every single day. My mom is the glue. My dad, he’s the hammer. He’s more of the handy one. He’s the one that’s gonna talk to us about different things in life and different things that we should know in order to be successful in life. There’s different things that he’s done that helped him overcome adversities and I‘ve overcome some adversities and he’s been there to just lift me up and tell me what needs to be done and how to do it.

NNPR: Just another random question. Do you like to cook?

George: If I was just being selfish, I would say eat! But if there’s other people in the group, I’d say I would cook for them because I like to share. Including my team, I like to share everything. So whenever I do great, my team does great.

NNPR: Playing your last game of your high school football career, tell us how you would like it to end and who would you like to play against to end it with?

George: I would love to end with a victory. If I was to play against somebody, I would want the match to be against Destrehan. I wanna give my all on the field, knowing that I did everything possible, everything in my ability and capability. Everything that I could do to help my team win and I just want to end off with a note saying that I did everything I could do on a team. Everything I could to help my team win. You never know how life goes, I just want to put everything on the table.  Putting your life on the life for your brothers is just a different feeling.

NNPR: Tell us about playing for Coach Brandon Brown.

George: It’s a great experience! Coach Brown has uplifted the team in ways that we cannot comprehend. Before he came here, we had repetitions of not going to the playoffs, we were losing, not being able to compete with other teams such as Thibodaux, Hahnville, and Destrehan. Coach Brown came here and he made an impact and always talked about building a building, brick by brick, and we’ve been doing that. If I had a chance to play with Coach Brown again, I would take it because he’s just the motivation of the team. He’s the heart and soul and everybody wants to live up to live up to that dream that he’s set, which is going to a championship. We just want to make that happen for him because he’s earned it. As a coach, as a mentor, as a teacher, he’s just earned it. He is a great coach and the players respect what he’s trying to do in building a standard. V And before I end, I’d like to shout out Mr. Damon Mason for all he’s done with the program I’m in and represent him in any way I can. He’s also helped me in making me the person I am.