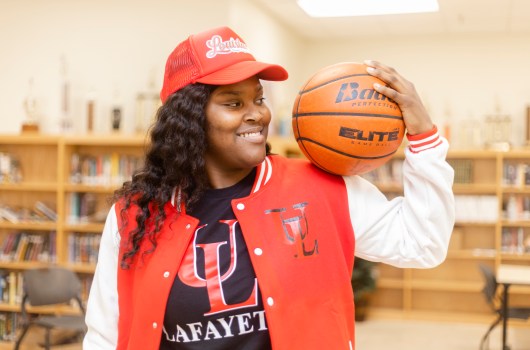 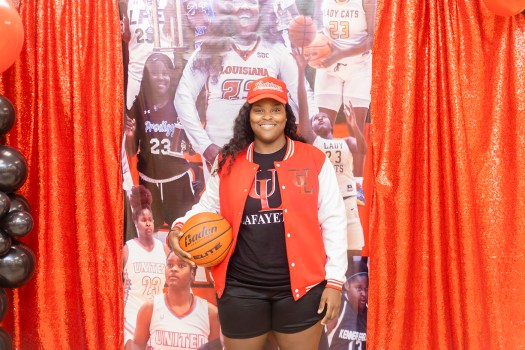 Jasmine Matthews signed a letter of intent to play basketball for the University of Louisiana at Lafayette on an athletic scholarship. Matthews is just as much of a star in the classroom, where she maintains a perfect 4.0 GPA. (Brooke R. Cantrelle/ L’OBSERVATEUR)

LAPLACE — Presented with seven Division One basketball offers, East St. John senior Jasmine Matthews put pen to paper last Wednesday inside the East St. John media center and announced her decision to join the Ragin’ Cajuns at the University of Louisiana at Lafayette.

“It felt like I accomplished something big,” Matthews said after signing a letter of intent. She was surrounded by her mother, sister and aunt for the occasion.

“ULL really stood out to me. It felt like home. The environment was nice, and it was really a no-brainer for me,” Matthews said. “I was looking for a coaching staff that cares about their players outside of basketball and teammates that make you feel welcomed. They have a good system. I feel like I fit the system. Everyone on the campus wants to see you succeed.”

Matthews is the first in her family to follow in the Division One footsteps of her father, who attended Jackson State. The University of Louisiana first took note of Matthews’ control of the game. She was a dominant playmaker on offense even as an underclassman, and her strengths on the court include scoring and creating opportunities for her team.

Matthews joined the 1,00-point club as a sophomore and currently has 1,711 points for her high school career. Aside from joining the exclusive 2,000-point club, Matthews’ other goals for her senior year include winning a state championship and earning first team all-state honors.

Matthews has made first team all-district for the past three years. She’s additionally a three-time MVP in District 7-5A, three-time member of the school athlete 4.0 club and three-time leader for rebounds and steals on the Lady Cats basketball team. She earned all-metro honors her sophomore year and collected a host of recognitions during her junior year, including second team all-state for LHSAA and LGR, being ranked a No. 4 player in the state by LGR, and being featured in the Class of 2023 Next Up All-Star game between Louisiana and Mississippi.

Coach Stasha James said Matthews averaged 26 points per game and had an average of 11.5 rebounds and four assists and steals during her junior season, when she helped lead the Lady Cats to a district championship.

Matthews said winning district was among the highlights of her high school career.

“It was a special moment after being here for so long and working so hard to get District, but we’re still not satisfied,” she said. “We’re going for the state championship.”

Matthews’ goals for her freshman year of college are to get some playtime and make a difference on the team. She’s no stranger to hard work on the court or in the classroom, where she’s maintained a 4.0 GPA since middle school.