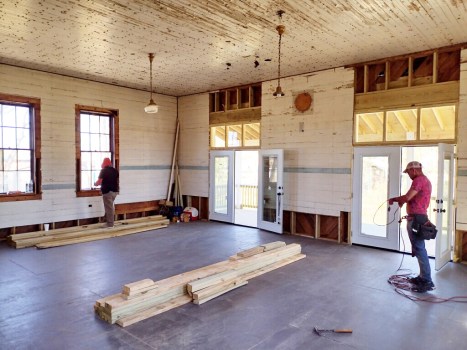 Work is underway inside the old Masonic Lodge on S. Church Street. 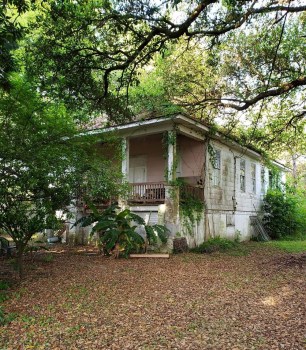 The historic building was overgrown when initially purchased. 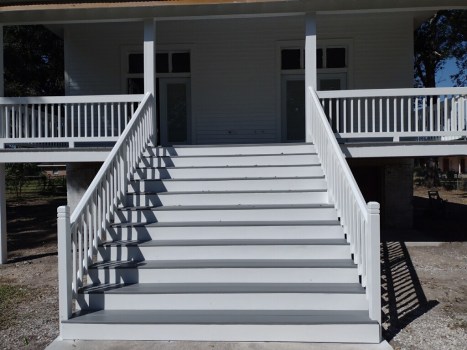 A new porch and wide steps are part of the historic restoration.

GARYVILLE — When Jimmy Lewis’ wife texted him a picture of a dilapidated Masonic Lodge she had stumbled upon on S. Church Street in Garyville, he knew instantly that it was meant to be.

Less than two months after the purchase was finalized, Hurricane Ida tore half of the  roof off. Being faced with extensive repairs without insurance wasn’t enough to discourage Lewis, who has spent the past year performing a historical renovation to bring the aging building back to its former glory.

Lewis was able to save all 14 antique cypress windows with weights but had to replace approximately 50 broken window panes. The building, originally open at the bottom, is raised seven feet off the ground. Renovations thus far have included the addition of a porch on the backside to match the front porch. The inside of the structure has been framed for bedrooms, and plumbing has been installed. Lewis said the next step is to complete electrical work, followed by the addition of sheetrock.

While Lewis is unsure of the exact age of the property, he knows the cornerstone was originally laid in 1926.

The home is estimated to have been built in the early 1900s by the free masons and to have later become a Grand Master Mason Hall for the masons who worked for the nearby Garyville Timber Mill Company. The structure was built with solid cypress trees using cypress moss as insulation.

The St. John Parish Historic District Commission highlights 1903 to 1931 as one of two periods of significance in the history of Garyville. This period began with Garyville’s founding as an industrial mill town by the Lyon Cypress Lumber Company and ended with the mill’s closure. Cottage and bungalow-style residents were noted to have comprised early workers’ housing.

More information on the restoration will be shared as the process continues.