“Love your neighbors, but keep your fences” 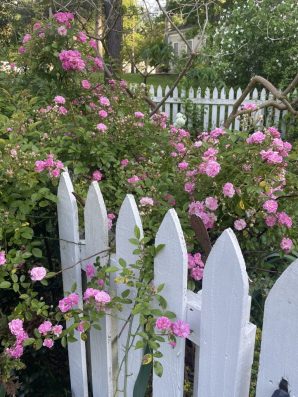 My son just committed actual crape murder, but we found a happy outcome by recycling the carcass into a funky fence for Felder.

His huge tree, way too large to wrap my arms around, was heavily infested with bark scale, with the only option between powerful systemic insecticides, which have been banned in many countries, or a chainsaw. We went with the latter, being a better long-term solution.

But then we used the trimmings to create a traditional ancient “wattle” fence by standing up the trimmed trunks and entwining them with smaller limbs and branches.

It isn’t your typical neighborhood accessory, but still creates a physical and visual barrier, cementing the concept of my place being set apart from the rest of the world. Think about it: There’s a reason we “go into” a garden; one of the root words for garden is gher which means to enclose; fences, from fens, the root word for defense, were created out of necessity, mostly to keep things out so what’s inside could flourish.

Swiss philosopher Jean-Jacques Rousseau said that “the first man who, having fenced in a piece of land, said ‘This is mine,’ and found people naïve enough to believe him, was the true founder of civil society.”

There are some very practical uses for fencing; temporary hurdles to keep dogs out of flower beds come to mind, and most towns require them for deterring kids from late-night dips in swimming pools. Some of my friends live behind tall walls that encircle their entire neighborhoods.

This is because, more than mere physical barriers, fences and walls they are also social signals which control behavior just by being there (though it’s said that a fence will keep out only honest people). Home homeowner associations usually dictate a veneer of conformity with rules on heights, material, set-back, and even which side faces out.

When made with decorative materials or muted with plants, they are also a subtle way of appearing pleasant to outsiders while keeping them at a distance. As the old proverb goes, “Love your neighbors, but keep your fences.”

Long before barbed wire bits of land were enclosed, less to wall out the riff-raff, more to contain or keep out free-roaming livestock. It started with rows of sticks and stacked stones, aided later by closely planted trees and shrubs sheared into tangled, impenetrable hedgerows. Native Americans often used high stockades to enclose their villages and crops. Ornate wrought iron became a Victorian norm, but last century saw a lot of those scrapped and melted into war material.

Chain link, an inexpensive industrial solution after World War II (love the ones with those cheesy decorative slats), are now almost universally shunned in suburbia, where once again most fences wood slats, though there is a resurgence of interest in brick, stone, metal, and even realistic plastic materials. I’m wondering when tech geeks will come up with a shimmery electronic fence that can be set up like holiday lights and programmed to show whatever we want people to see?

Beyond the cliché about living a staid life behind a white picket fence (spouted mostly by those who don’t), fences transcend selfishness and fear; they can also be soothing to those who erect them. A roll of my great-grandmother’s woven wire fencing reminds me that I still need a respite from a complex and troubling world.

My son’s murdered crape myrtle is now a physical and subtle visual reminder that my garden is a private space. I’ve just split the historic difference between an ancient pile of rocks and modern mass-produced fencing, with my rustic, home-grown wattle.