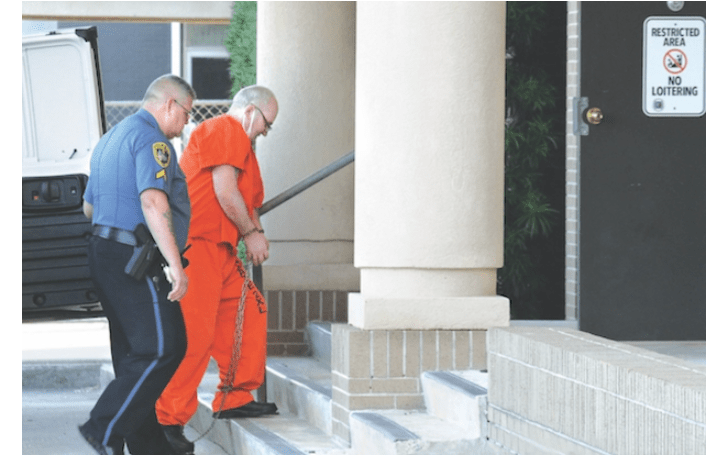 Kevin Daigle was sentenced to death Thursday morning in the 2015 fatal shooting of Louisiana State Police Trooper Steven Vincent, despite efforts from his defense team to delay the hearing.

“We finally got the result the family has been waiting for — justice,” Vincent said. “Deviant people cannot go around shooting police officers intentionally, showing no remorse, and not have the fullest extent of the law allowed in the state, which is the death penalty. It’s good to see he got the full extent.”

“I want to be there when he’s executed; that will give me closure,” he said through tears. “I want to see that he is no longer around to harm anybody, whether it be out on the streets or even incarcerated, I just don’t want him hurting anyone else. It’s good to see that this criminal is getting what he got coming.”

“I could always look to him and see what he was doing, especially in law enforcement, and I learned a lot from him growing up,” Terrell Vincent said. “He was a good person. He had a strong faith, he prayed, attended Mass. When he applied himself, he went all out. I know there will be appeals but, for me, just hearing the sentencing was enough.”

Before sentencing, Joshua Schwartz with the Capital Appeals Project asked Judge Clayton Davis to delay the hearing in order for his office to subpoena additional records from the sheriff’s office.

“This is not a case of mistaken identity, we’re simply seeking documents that would show why he acted the way he did on that day,” Schwartz told the judge. “We want to look at all the claims put together because the state was allowed to introduce prejudice during the trial.”

“We’ve all been through a lot — and most of what we’ve been through is video footage of this killing that we will never forget,” Davis said. “This community mourns the death of Trooper Vincent and that won’t end. Justice in its harshest form has been agreed upon by the jury and this court sentences him to death.”

Daigle, outfitted in an orange jump suit with the words INMATE XL written in bold black letters across his back shoulders, continually shook his right leg during the hearing, causing a constant clanging of the chains keeping him in his seat. After the sentencing, Daigle was escorted back to an awaiting vehicle to be transported to Louisiana State Penitentiary-Angola.

Calcasieu Parish District Attorney Stephen Dwight said his office will “continue to fight every step of the way” as Daigle’s defense team begins the appeals process.