Comets aim to get healthy as district play begins 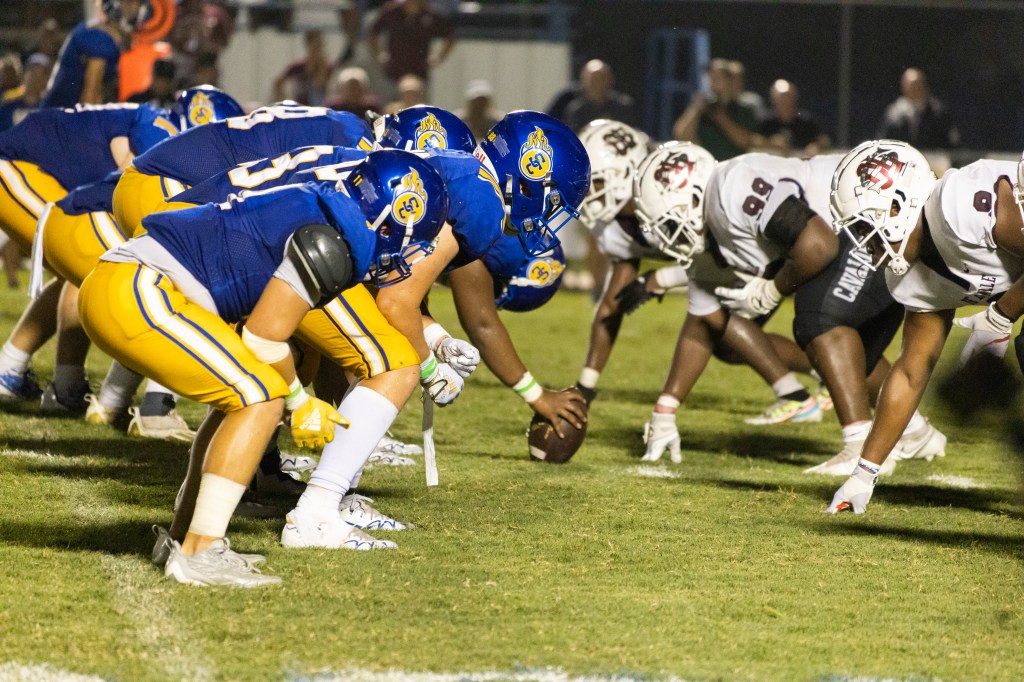 The St. Charles Catholic football team, pictured during a game against De La Salle, has been badly bitten by the injury bug this year.

LAPLACE — All of the adversity the St. Charles Catholic football team faced last year was outside the lines, in the heart of a hurricane-stricken community. This year, it’s all inside the lines.

The Comets (4-3) have been struck by the injury bug multiple times this season while facing a tough schedule.

Quarterback Ayden Authement broke his wrist in the third game of the season and has been out ever since. He’s expected to return this week, not at quarterback, but on the defensive side. The defense has taken a hit with Michael Hotard and Jaden Breaux sidelined for concussion protocol, in addition to Britten Dean and Matt Loup sustaining injuries. Running back Samare Scott couldn’t compete last Friday due to severe hydration.

“It’s been a revolving door,” said head coach Wayne Stein. “We’ve started 35 different players, which is unheard of especially for a 2A school. Our coaching staff has done a good job of trying to piece it together and give us a chance on a weekly basis.”

Sophomore Shane Zimmerman and junior Hudson Heltz have pleasantly surprised Stein with their ability to adapt to new positions. The Comets are being led defensively by Kyle Cannon, a junior who Stein believes will be playing on Saturdays one day.

With a new set of challenges, St. Charles Catholic hasn’t been able to replicate the success of last year’s undefeated season. After opening the year with wins against Shaw and Lutcher, the Comets suffered back-to-back losses against Teurlings Catholic and De La Salle. For the next two weeks, St. Charles found success on the road against Vadebilt Catholic and Abbeville. However, Week Seven ended in another late-game loss to St. Martinville.

Stein said it’s a testament to the strength of schedule that the Comets are still ranked third in the power rankings despite having a 4-3 record.

“I knew it was going to be challenging; that was by design. I knew we weren’t going to be undefeated,” Stein said. “We’ve played, I think, the toughest schedule that any 2A school has played. We’ve been in every game, and we have had an opportunity to win every game. I think we will continue to get some of those guys back health-wise, and if we can do that, I still think we are somebody to contend with in the end as far as the state championship. We’re not in this thing to be the best team in October. We’re in this thing to hopefully be playing in December.”

Getting healthy is the goal as St. Charles Catholic kicks of District against MLK Charter Friday night. According to Stein, MLK is a 6-1 team that is well-coached and versatile.

“They can beat you at the run game, and they have some guys who can throw it over your heads,” he said. “We’re going to have to be lights out with special teams and really tackle because their running back is an elite player.”

The final weeks of the regular season close out with district games against Country Day and Isidore Newman, two championship-caliber teams the Comets are very familiar with.

Less familiar are the opponents who will comprise this year’s playoff brackets following a LHSAA change that leveled the playing field by adding more schools to the “select” category once dominated by private schools.

“We’ve been playing 12-team brackets with the same teams – Dunham, Notre Dame, Lafayette Christian. That’s not what it’s supposed to be like in the playoffs, and it’s just not fun for the kids,” Stein said. “This change adds a couple of good teams to the mix in a full 24-team bracket. You have to play well to advance. We are excited about this decision and hope that it sticks and becomes something we can build on in the future.”