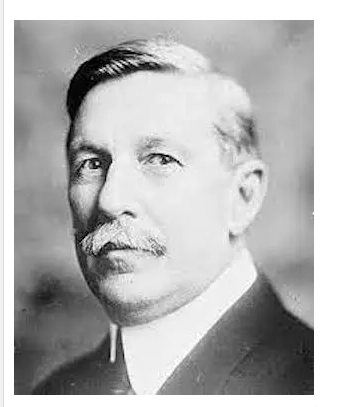 U.S. Rep. Arsene P. Pujo (1903-13) of Lake Charles, La., made national history when he conducted a money trust investigation that led to creation of the Federal Reserve Board in 1913.findagrave.com

The Federal Reserve Board that has raised interest rates five times this year to try and curb inflation was created in 1913 following a Money Trust Investigation conducted by a committee headed by U.S. Rep. Arsene P. Pujo of Lake Charles.

Pujo in 1902 became the first person elected to represent Louisiana’s 7th Congressional District when it was created. During his fifth and final term in the U.S. House, Pujo served as chairman of the House Committee on Banking and Currency that set up the investigation.

An investigation was necessary because a group of Wall Street bankers and financiers was trying to control the nation’s money supply. The Federal Reserve Act was signed in 2013 in order to prevent the concentration of wealth in the hands of those wealthy Americans.

The findings of the Pujo investigation were widely publicized in the Louis Brandeis book, “Other People’s Money and How the Bankers Use It,” according to the “Pujo Committee” report on Wikipedia.

“The Public Career of Arsene P. Pujo” is the title of my master’s thesis at LSU. The late-Donald Millet, professor of history at McNeese State University, had urged me to research Pujo’s contributions. Pujo was also the subject of the first column I wrote for the American Press on July 26, 1962, which preceded a 7th District election.

We are coming close to another congressional election for the 3rd Congressional District in this corner of the state. Declining population caused the loss of the former 7th District. The many things Pujo accomplished are excellent examples of the kind of representation citizens deserve.

Pujo was the son of Paul and Eloise Pujo, a pioneer family in Lake Charles. Paul Pujo came to the city about 1849 and established one of the first general stores in the city.

Arsene Pujo, born Dec. 16, 1861, was the third of four children. He read law in Lake Charles under Gabriel A. Fournet and was admitted to the bar in 1886. He and his wife lived at Bilbo and Mill streets, and they had two daughters. Pujo Street is named after Arsene Pujo.

Pujo was an active participant in the anti-lottery movements in 1888 and 1892 and was a delegate-at-large to the Louisiana Constitutional Convention of 1898. He defeated three opponents in the 1902 congressional race.

Railroads and waterways were the principal means of transportation at the time, and Pujo was successful in passing legislation resulting in improved waterways throughout his district.

A monumental project for which he was responsible was construction of the Mermentau-Sabine section of the Intracoastal Canal. Leon Locke, secretary of the Lake Charles Board of Trade (and who later became mayor), coordinated efforts for the canal at home while Pujo secured the necessary funds and assistance from Washington.

Pujo secured appropriations which resulted in vast improvements to Calcasieu River and Pass. He also secured funds for the first federal building in Lake Charles, the post office on Broad Street. In addition, he secured funds for buildings in Crowley and Jennings.

He championed rice and lumber interests in the district, supporting tariffs for protection of those leading industries in the state. Pujo also supported far-reaching legislation that regulated railroads.

While in Congress, Pujo secured appropriations for the 7th District that exceeded all the money expended by the federal government in the district during the century of American rule before his election.

Vance Plauche (1941-43) became the second and last man from Lake Charles to serve the 7th District. Former Gov. Edwin W. Edwards, who served an unprecedented four terms as governor, represented the 7th District in Congress from 1965 to 1972.

Edwards replaced U.S. Rep. T.A. Thompson of Ville Platte, who died July 1, 1965, in an automobile accident in Gastonia, N.C. Thompson was bringing his family home for the Fourth of July. His wife, two children and the family maid escaped serious injury.

John Breaux, who followed Edwards, Chris John and Charles Boustany recently represented this area in the U.S. House. Like Pujo, all three chalked up excellent records while in Congress. They have endorsed Holden Hoggatt, a Lafayette Republican prosecutor who is challenging Republican U.S. Rep. Clay Higgins of Lafayette.

Early voters and those who cast ballots on Nov. 8 need to decide whether Higgins is giving them the kind of representation they got from Pujo and the three former congressmen who want someone else.