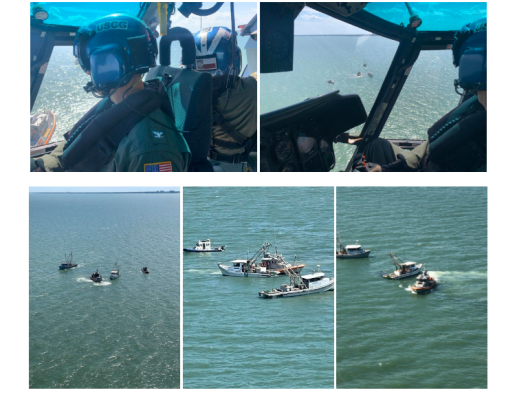 Coast Guard Sector Corpus Christi command center watchstanders received a report at 12:56 p.m via cell phone from the operator of the Working Together, a 44-foot fishing vessel, stating their vessel was taking on water 3 miles southeast of the Corpus Christi Harbor Bridge in Corpus Christi Bay.

Once on scene, the RB–M crew began assisting the vessel with a P-6 dewatering pump but was unsuccessful due to a mechanical failure. The Dolphin crew departed the scene to acquire another dewatering pump from Air Station Corpus Christi.

The Dolphin crew arrived back on scene, lowered the dewatering pump with a rescue swimmer and began to dewater the vessel.

“Today was a great example of how we can seamlessly operate with other Coast Guard units and agency partners to complete the mission,” said Lt. Dan Gillis, Air Station Corpus Christi helicopter pilot. “Our consistent training with Station Port Aransas crews allowed us to deliver a much-needed dewatering pump, while the Port Police vessel relayed vital information to the vessel in distress.”