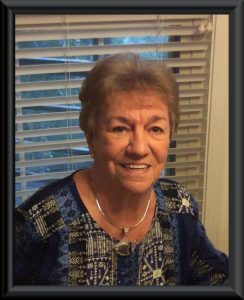 Services for Madge Beatrice LeBlanc Kollatt, age 81 of Covington, Louisiana and formerly of Hot Springs, AR. will be held at 10:00 A.M. Friday, October 7, 2022 in the Bailey & Foster Chapel in Palestine. Visitation will be held one hour prior to the service.  Burial will follow in Roselawn Park.  Arrangements have been entrusted to Bailey & Foster Funeral Home.

She was preceded in death by her parents, her husband Frank R. Kollatt, Jr., sister Sybil Newcomb, and brothers Carl LeBlanc, Heman LeBlanc and Adrian LeBlanc.

She graduated from Meadows Draughn College in New Orleans, and was married to Frank September 2, 1961.  Madge lived in multiple places as she was a military wife.  She enjoyed working for the Captain of the Navy in various states and overseas.

She obtained her amateur Ham Radio license (KA5RSH), although she didn’t get on air much, she was proud of her license.  When Frank passed away, she assumed his amateur Radio License call sign (W5BPT).

In lieu of flowers please make donations to The American Cancer Society in honor of Madge Beatrice LeBlanc Kollatt.

To view online leave condolences or sign the guest book go to www.baileyandfosterfuneralhome.com.