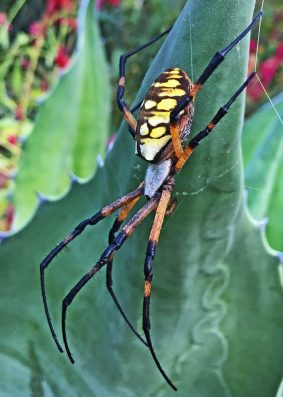 Had a conniption fit in the front yard last week, hopping around, arms flailing, and making strangling noises.

Now, I’m not bothered in the least by garden snakes, lizards, tomato hornworm, praying mantids, bumblebees, bats, or most other garden critters. Not even the giant, very bizarre “hickory horn devil” caterpillar (shudder). But when I disturb a wasp nest, or run into a spider web I have an instant, atavistic, cellular-level reaction.

It goes way back to warnings from my mom about black widows in the woodpile, bumping my head into a wasp nest in a kindergarten playground fort, having yellow jackets chase me after mowing over their nest hole, and daddy longlegs (which technically aren’t spiders) in my tent at boy scout summer camp. And maybe from being introduced as a teenager by J.R.R Tolkien to the hobbit-eating Great Spiders of Mirkwood, and Shelob and her large, unnatural stinger.

And nope, it didn’t help when I learned about the huge benefits these voracious predators offer in the garden, eating a lot of moths, grasshoppers, flies, mosquitoes, caterpillars, beetles, stinkbugs, and other critters, and their being eaten in turn by birds and bats. This helps me tolerate them in principle, as long as I know where they are.

I’ve learned to generally leave the ones outside alone, and those that make their way into my cabin get scooped up in a drinking glass and chucked outside.

Luckily I don’t have brown recluse spiders like those that crept around the old farmhouse I shared while in graduate school; about the only indoor spiders I have these days are the tiny elusive ones that leave sticky strands of cobwebs hanging from my ceiling, reminders that I need to do more dusting. And I kinda admire the spunky attitude of a little hairy jumping spider that hangs out near my computer, hopping around after fruit and other flies that make escape my fruit bowl. When I point my finger at it and it rears up as if to say “Bring it on, big boy.”

Out in the garden, overlooking the occasional wolf spider in the grass and funnel spiders in the toolshed, I am fascinated by the incredibly beautiful green lynx spiders that stretch across zinnias and other flowers waiting for their prey. And I have even somewhat overcome my arachnophobia around the big orb weaver spiders that stretch between the house and some shrubs, in spite of how they can catch dragonflies, small lizards, and occasionally a hapless hummingbird.

The most common are thumb-size chunky yellow and black garden spiders and the equally large and long-legged but more slender “golden silk orb weavers” with orange bodies and yellow and black legs with little tufts of black hairs at each leg joint.

None are harmful, other than the fright factor, and they stay put so I know where they are. Though their bite contains a tiny bit of venom that at most stings like a bumblebee, the only risk of getting bitten is if you pick one up roughly. Just. Don’t.

Usually there are only one or two or so per garden, but that’s about to change. The Asian joro spider, a very large orb weaver with a bright yellow body, was discovered in Georgia less than ten years ago; though it has not been found so far in Mississippi, it’s spreading rapidly this way, and when it shows up it’ll be by the dozens.

Time to get a spider stick to hold up for walking around the yard and out in the woods. Meanwhile, you’ll know what happened if you hear my squeal.