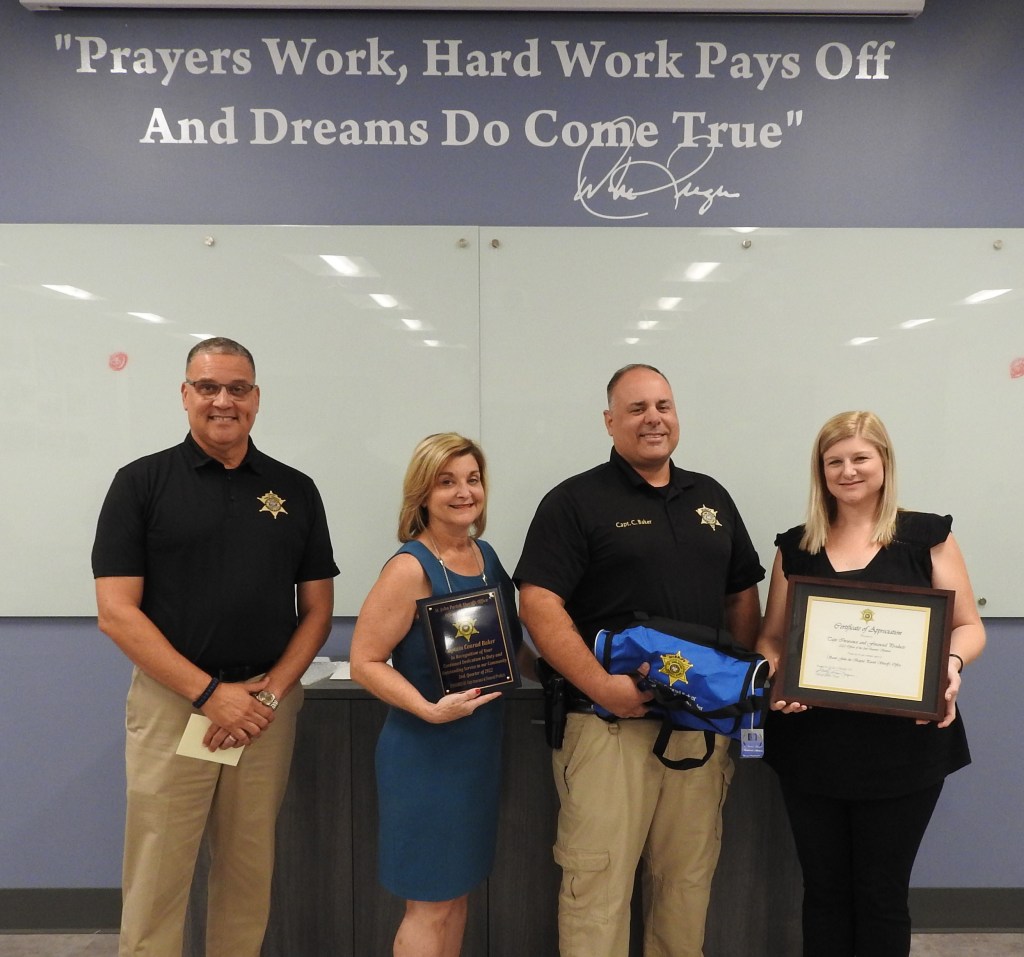 As Assistant Commander of Technology, Captain Baker has many duties. He is in charge of the department’s radio system, monitoring and maintaining two communications towers, more than 500 police radios, over 100 radios for the fire department, and nearly 500 surveillance cameras connected to six servers throughout the St. John Parish.

With Sheriff Tregre and Cpt. Baker are award sponsors Natalie Tatje and Kelsey Jumonville of Tate Insurance and Financial Products.

Among Captain Baker’s most notable work was when Hurricane Ida destroyed or damaged nearly 250 surveillance cameras in August 2021. Captain Baker immediately began working to restore the system, continuing the effort well into the night for months in the wake of Ida.

As a result of his hard work and perseverance, Captain Baker was able to get nearly all 250 cameras back on line throughout the parish.

Following Ida, Captain Baker also was able to secure a new state of the art Firstnet Compact Rapid Deployable Tower system for the SJSO’s IT Division, at zero cost to the department. This “Cell Tower on Wheels” is one of the first issued in the state and can be used anytime the SJSO is in need of WiFi, Internet or cellular coverage during an emergency or special event.

Captain Baker has implemented new features in SJSO radios such as real time and GPS tracking for officer safety that dispatchers and supervisors can view in real time. He has worked to improve the department’s back up radio capabilities to spread throughout St. John Parish for officers as well as for the parish fire services, emergency operations center, and any other outside agencies that may come into the area. This ensures that during any time of emergency, any agency from around the country can assist St. John Parish and always have communications.

And earlier this year, Captain Baker also was instrumental with the implementation of an improved investigative tool for vehicle identification, the Flock Safety system, that has been instrumental is assisting officers in locating 19 stolen vehicles since February. Through these stolen vehicles, as of last month, 24 arrests were made including six wanted people.