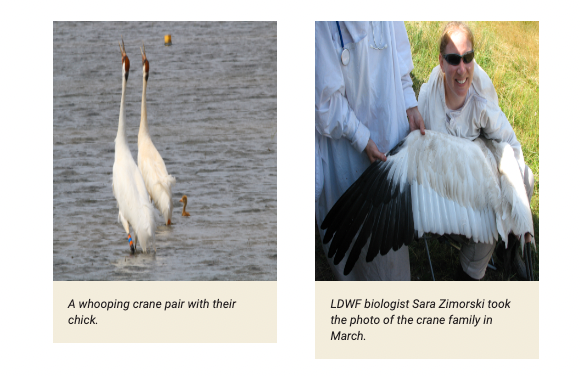 Experienced photographers know that getting an iconic picture takes patience, skill and being at the right place at the right time. A little luck helps, too.

Louisiana Department of Wildlife and Fisheries (LDWF) biologist Sara Zimorski, who oversees LDWF’s Whooping Crane Reintroduction Program, took a beautiful photo of a whooping crane pair, along with its chick, in March just 11 days after the chick hatched in Avoyelles Parish.

The photo, with the pair, heads held high at the same angle, making a call, has made its way around the world. The Sydney (Australia) Morning Herald selected it as one of its top 10 photos from around the world in its Sept. 10 edition.

The Sydney Morning Herald is considered one of the nation’s more influential newspapers with a daily circulation, print and online, of 8.6 million readers

“Crane pairs exhibit a lot of synchronous behavior – particularly threats and calls,’’ Zimorski said. “But it really was just luck how perfectly in sync their spacing and the position of their heads and beaks were for the picture.’’

A total of 15 whooping crane chicks hatched this year with the eight surviving to fledge. It brings the Louisiana population to 76, 16 of which were wild hatched in the state. The first wild hatched Louisiana chick came in April of 2016, the first to hatch in the state in more than 75 years.

Zimorski was doing field work that day and had brought along a camera with a telephoto lens. She said they knew the pair had a young chick and, because the parents generally take the chick off the nest within a few days, they are able to get out to the nest to collect habitat and nest measurement data without disturbing the birds.

The family had moved over to the field south of where the nest was located so Zimorski was able to collect the vital data from the nest. As she completed her work, the family had crossed the farm road back into the nest field.

“When I was finished and ready to leave they had crossed the farm road and were back in the nest field,’’ Zimorski said. “So when I was leaving I took our UTV along that farm road and caught that view of them from behind. They kept moving away from me, probably back to the nest and I just got lucky with that photo.’’

Louisiana’s whooping crane reintroduction project began in 2011 when 10 juvenile whooping cranes from the Patuxent Wildlife Research Center were released at the White Lake Wetlands Conservation Area in Vermilion Parish to initiate the non-migratory flock. This marked a significant conservation milestone with the first wild whooping cranes in Louisiana since 1950. Support of partners, including Chevron, the U.S. Fish and Wildlife Service, Audubon Nature Institute, Coypu Foundation, Entergy, Cameron LNG, SLEMCO, International Crane Foundation and the Louisiana Wildlife and Fisheries Foundation, have allowed LDWF to expand its effort in Louisiana.