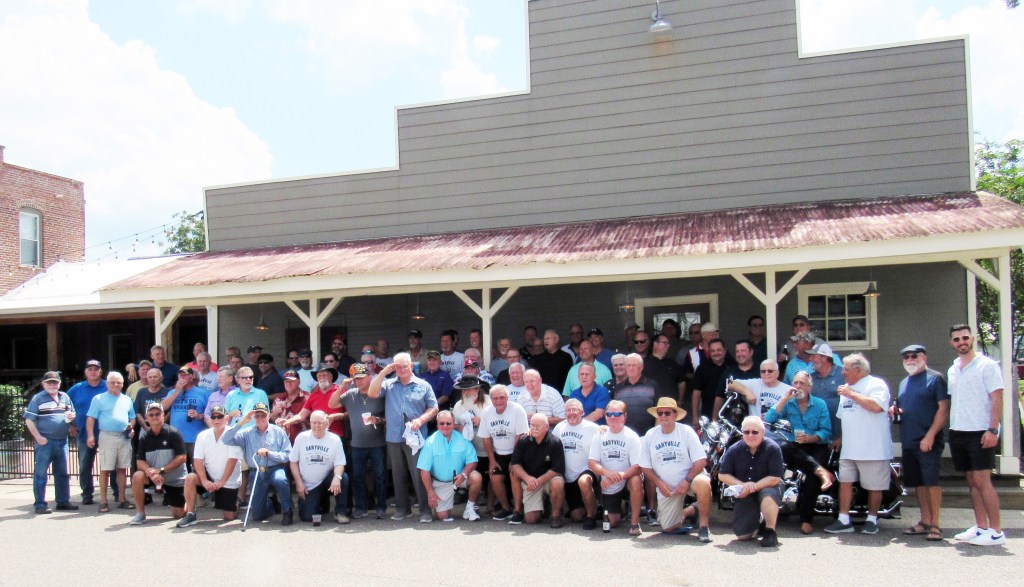 Approximately 100 men, most ranging in age from 50 to 70, gather for a photo in front of the old Garyville pool hall.

GARYVILLE — The old Garyville Bank and Pool Hall was overflowing with memories of a simpler time during the first “Boyz of the Village” reunion held on September 9.

The event drew participation from approximately 100 men who live, once lived or used to frequent the bars in Garyville. Friends who had not seen each other in decades were reunited, many now ranging in age from 50 to 70. Some came from Texas and across Louisiana, while others have never left the community which they all at one point called home.

Garyville native Carl Monica said it was a great gathering filled with food, fun and football.

“They all loved it so much, they want to have it every year. I don’t know if that is possible, but it was a very good turnout. Most of the people there were here from the 1940s all the way to the 80s,” Monica said. “The reason we had the function was because every time people got together, they always had their old stories. We could go on for hours talking about the things it had and unfortunately don’t have anymore. We still have the Bank and the Lumber Company we’re trying to restore. The old pool hall is still there, and so is the grammar school that was built in the 40s. It’s still got the semblance of a nice community.”

Garland Landry was one of the oldest at the event, having lived in Garyville for all of his 81 years. He’s the last surviving of eight siblings after having recently lost his older brother, a 97-year-old veteran who represented St. John Parish in World War II.

Landry’s memories as a child include getting up and eating breakfast, then spending the entire day outside until it was dark. At the old sawmill, now known as the Garyville Timbermill Museum, he and his friends would play among the stacked logs. They would travel the town on makeshift scooters fashioned from old skates, hunt in the woods, and fish in the big pond behind the mill. Sometimes they would even swim across the Mississippi River, back before it was industrialized and had a lot of boat traffic.

Garyville’s growth as a metropolis spurred from the Lyon Lumber Company beginning in 1903. A forest of cypress trees presented economic opportunity, and jobs were in abundance for families relocating to the area.

“A thousand people were employed by the mill. Then the Lyon Company built the entire town. There were hotels, stores, boarding houses, a library and railroad stations,” Monica said.

Among the railroads was the Garyville Northern, which stretched north to the town of Livingston. Men from New Orleans would travel by train into Garyville for work and return home to the city in the evenings.

The Lyon Lumber Company closed its Garyville operations and relocated to Oregon in the 1930s after facing devastating fires and the impact of the Great Depression. However, many families who made a living in the lumber business stayed in Garyville, and their descendants continue to raise families there today. Monica’s family, immigrants from Sicily, are among those who have made a name for themselves in the River Parishes.

“Many people in the River Parish area contributed to Garyville because that’s where people went to find jobs originally. It was a shopping hub, it was everything. It had electricity and water in a time when most places did not have that. It was really a small, urban community,” Monica said.

Several festivities were unique to the town. St. Joseph’s Altars were important to Monica’s family, and a lot of community events were tied to the Italian Hall and the Catholic Church.

Garyville had a strong baseball tradition. With a compact ballpark located in the middle of the close-knit town, you never had to travel far to strike up a game with someone. Teams from Reserve, Lutcher, LaPlace and Gramercy would often travel to Garyville to compete against one another at the park.

One of the most unique festivities which came in the latter half of the 20th Century was the annual Garyville Wheelbarrow Parade and Festival. Started more than 40 years ago by two friends who were LSU and Tulane fans, the annual football game between the teams was celebrated by having men push each other in a wheelbarrow through the town of Garyville. The parade would often start at the firehouse and end at the Garyville Youth Organization facility.

Historic district preservation has been a goal among locals for many years. Unfortunately, government funding is slow and often unreliable. A lot of fundraising, particularly for the Timbermill Museum restoration, has resulted from the annual Garyville Sings & Strings Festival.

“We’re trying to preserve what little we have left,” Monica said. “I think we have a sleeping diamond in the rough for tourism in the River Parishes. We’re hopeful that things will come through, but like everything else, you have to have the funding and support.”