The preschool class at St. Joan of Arc Catholic School in LaPlace goes gold for Carson in honor of Childhood Cancer Awareness Month. 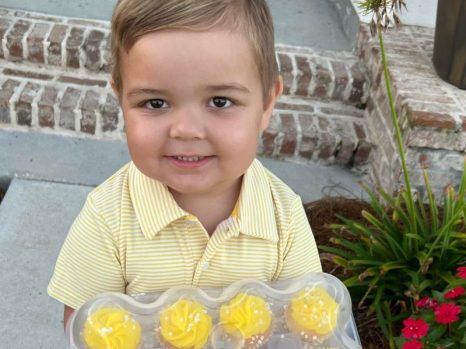 Carson Landry brings cupcakes to the staff helping him through his cancer journey at Children’s Hospital New Orleans.

MONTZ — Three-year-old Carson Landry continuously amazes his family with his easygoing nature and ability to take things in stride — even while undergoing intensive treatment for childhood cancer.

Carson was diagnosed with acute lymphoblastic leukemia in July 2022, after his mother noticed scattered bruising on his skin beyond what would be considered normal for a rough and tough little boy.

While Carson achieved his goal of entering remission in the first phase of his cancer treatment, his fight is far from over. Carson’s mother, Paige Landry, said remission is an indication that Carson’s body has responded well to the initial treatment phase, known as induction.

“The treatment plan is very extensive, and if you don’t take it day-by-day, it can get pretty overwhelming. If we stopped the treatment now, the cancer would likely return within a year,” Landry said. “After the induction period, the goal is that you are in remission. Because leukemia is so persistent, you continue with what’s called consolidation. Then you go into maintenance, which is what we will do after these next six months or so, and you stay in maintenance for two years.”

The first six months of treatment is especially intense. Each week, Carson has labs drawn, receives blood or platelets if needed, and receives two chemotherapy medications that need to be taken every 11 days. He’s also received at least five lumbar punctures.

As a nurse, Landry feels overwhelmed when she thinks too much about the medications he’s receiving and what effects they can have on his little body. Despite having some rough days following chemo treatments, Carson always seems to bounce back. What’s most surprising is how he has responded to his diagnosis.

Carson will nonchalantly ask his mother if it’s a chemo day and explain to his sisters that he needs to have a needle injected into his back because he has cancer. In the same breath, he will say, “Don’t worry, I’m going to be okay.”

Carson has earned the nickname “Tonka” among the medical staff because he’s as tough as the trucks he loves to play with. He’s all boy, and he still finds joy in playing outside, going into the garden with his Paw Paw, and riding his tractor and four-wheeler.

“It doesn’t even phase him that he has to go for chemo. He swallows a whole chemo pill. It’s unbelievable,” Landry said. “We try to do little things to make it fun for him. He and his dad like to dress alike when they go to the hospital, and it’s a big running joke. Or we will wear his Carson shirt or bring cupcakes for the staff.”

With two other children at home, doctors have advised the family to keep their daily routines as normal as possible.
“With the help of the community and our friends and family, we’ve been able to do that,” Landry said. “People have chipped in to bring something for dinner or offer to watch the kids.”

While Carson isn’t currently able to attend preschool at St. Joan of Arc in LaPlace, he was recently invited to join the class for a two-hour playdate. St. Joan of Arc has continued to stay in contact with the family and offer opportunities to keep Carson engaged during his treatments.

Shortly after Carson’s diagnosis, St. Charles Catholic hosted a blood drive in his honor and saw the biggest turnout since before the COVID-19 pandemic.

At this time, Landry said the best way to support Carson is to pray that his body will continue to respond to treatment with minimal side effects.

Those who would like to join the fight against childhood cancer may also donate directly to the hematology and oncology unit at Children’s Hospital New Orleans or visit the following link: