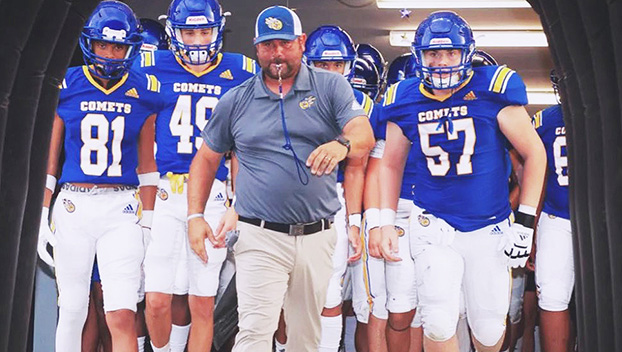 The stellar Lutcher Bulldogs threatened to end the year-long winning streak last Friday night in LaPlace, but the Comets lived up to their name as defending champions when a clutch tackle in the final moments of the game sealed the 21-20 victory.

After a scoreless first quarter, Lutcher’s D’Wayne Winfield made an 18-yard touchdown run to get the Bulldogs on the scoreboard. Winfield added another touchdown in the second to give Lutcher a 14-0 lead as halftime approached. With 50 seconds left in the second, SCC’s quarterback Ayden Authement scored on a nine-yard run.

St. Charles Catholic tied in up 14-14 in the third with a long touchdown pass between Authement and Davon Stirgus.

The game continued to heat up early in the fourth quarter as a touchdown pass to Daniel Joseph gave the Comets a 21-14 lead. Tension built as Lutcher’s Winfield added yet another touchdown, but the Bulldogs missed the extra point, leaving St. Charles Catholic up by one point late in the game. Lutcher had seven seconds left and seemed poised to steal the lead in the final moments. Michael Hotard’s tackle at the three-yard line ended the game with the Comets on top, preserving SCC’s incredible winning streak.

The Comets will be challenged again in Week Three as they travel to Teurlings Catholic for the first away game of the season.