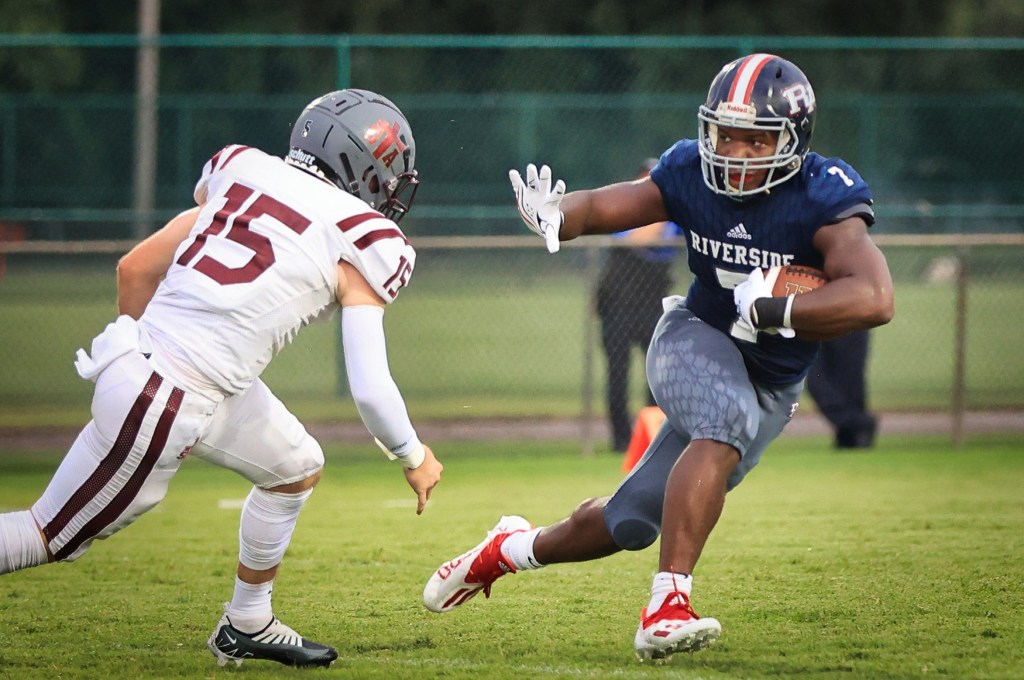 RESERVE – Elijah “Bill” Davis was the story last Friday night with seven touchdowns and 304 yards as Riverside Academy opened the season with a 62-23 win against St. Thomas Aquinas.

Davis is a Class of 2023 Ragin’ Cajuns commit who has twice earned all-state recognitions. First-year head coach Lee Roussel wasn’t surprised to see Davis shine, especially after he went for 150 yards during both the scrimmage and the jamboree on only eight and nine carries, respectively.

“Any time you can go for over 300 on 21 carries with seven touchdowns, that’s a special game. When we need a play, he’s the guy we’re going to,” Roussel said. “He’s very capable of creating some big runs and explosive plays, and when he gets into that third level, he’s got some breakaway speed.”

Roussel also credits the guys at the wide receiver position for blocking the perimeter and setting up some big runs.

Physical run blocker Scott White had some explosive pass plays, including two catches for a total of 88 yards. Meanwhile, quarterback Luke Hymel was seven for 11 in the season opener, and Roussel said the four incompletions were strategic drops.

“(Hymel) has been very, very efficient for us for controlling our offense and doing what’s asked of him,” Roussel said. “The numbers may say one carry for nine yards, seven for 11 for 180 yards, but as far as what we’re asking him to do, he’s executing and playing for us at a high level.”

Roussel observed some sloppy play during the first half against St. Thomas Aquinas in the kicking game and special teams, but the Rebels came out stronger in the second half of the game. The defensive gave the Rebels better field positions to work with, and the running back and offensive line did a nice job of closing out the game.

This Friday, Riverside Academy will face Isidore Newman, a very strong football team that silenced 5A Hahnville 35-14 in last week’s season opener. The week prior, the Greenies took down a very physical De La Salle in the jamboree.

Roussel said it’s going to have to be a very good week of preparation. Cleaning up the field has little to do with the X’s and O’s and more to do with what the Rebels can control, from limiting penalties to playing with better effort.

“You want these tests to see where we are. It’s no secret they are a good football team and well-coached, and we are going to respect them, but I’m excited to go out there and compete,” Roussel said.