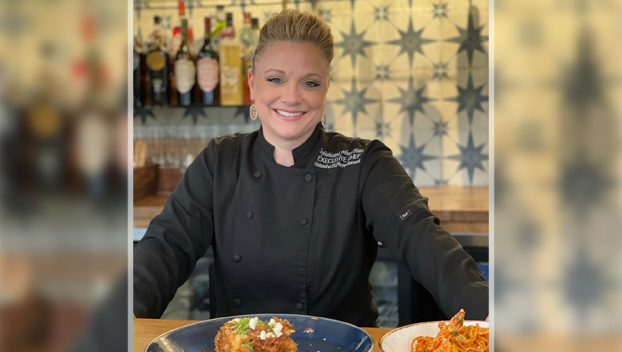 Chef Natasha Clement of LaPlace, one of the owners of SANTOS Restaurant in Luling, had to help the business recover while dealing with the rebuilding of her own home after Hurricane Ida.

LULING — When SANTOS celebrated its grand opening on August 20, 2021, restaurant owners Buddy Boe and Natasha Clement had no idea Hurricane Ida would brew in the Gulf of Mexico just five days later.

The entire region was knocked to its knees on August 29, after only four opening shifts at the new restaurant. Half of the staff, including Clement, had no home to return to. Two months of power and Internet outages were followed by the Omicron outbreak, rapid inflation and global supply chain shortages.

SANTOS celebrated its one-year anniversary this month against all odds, and Boe and Clement look forward to expanding in the River Parishes.

“We are very proud of where we came from and where we are. We told our team when we got to the anniversary that after this year, there’s not much that can be thrown at us that we can’t survive. We will be stronger and know how to do it better next time,” Boe said.

The grand opening of SANTOS on Highway 90 in Luling came just one month after Boe took ownership of his family’s restaurant, Buddy B’s, in Garyville. While Buddy B’s has for more than two decades attracted the blue collar crowd with homestyle meals, SANTOS was a new concept that combined Boe’s love for Latin culture with St. John Parish chef Natasha Clement’s expertise in southern cuisine.

Marketed through Boe and Clement’s company, Sophisticated Hospitality Group, the restaurant saw a sold-out soft opening and great promise for the months to come.

“Everything was leading to that snowball effect that every brand new business hopes for, and then the storm hit, and it was gone. All of that energy and that momentum just evaporated,” Boe said.

The first focus was making sure all of the workers at Buddy B’s and SANTOS were safe. Then it was time to survey damage at the restaurants.

Being an older building, Buddy B’s sustained more physical damage, including a tree that toppled onto the restaurant. Cleaning up the site became top priority to ensure the storm didn’t take down a nearly 25-year legacy.

Meanwhile, SANTOS was seemingly protected by the John, James and Charles, the three saints the restaurant was named after. The storm damage was miraculously limited to the landscaping and a few ceiling tiles and vents. However, while the power and Internet came back on simultaneously at Buddy B’s, SANTOS was forced to operate on a Wi-Fi hotspot for several extra weeks.

Both restaurants were up and running, albeit in a limited capacity, by the first week of October. Adjustments were made to the hours and menus, including the addition of family-size meals that would feed multiple people at a time when hot food was hard to come by.

“Especially in those first couple of months, we were a sense of normalcy for people whose houses were not done,” Boe said. “They could come eat at a nice table and have a taste of a meal that wasn’t microwaved.”

At the same time, Clement was faced with rebuilding her home in LaPlace after losing everything. She’s learned not to attach herself to material things.

“I lost half of my house with Isaac, and this time, the whole thing,” Clement said. “When you lose everything, there’s a realization to how much more there is to life. You appreciate more of what you can create and give back to the people in your life, rather than the things you have accumulated.”

For Clement, giving back meant cooking for the neighborhood in her front yard and delivering takeout to people she knew didn’t have food. It also meant keeping the restaurants open to continue to offer food and employment to the community.

“It was a strange time, and I don’t think it was until people were starting to settle back into their homes that things became a little more normal. It’s still ongoing. I just got back into my home four weeks ago. It’s been a long road for a lot of people,” Clement said.

The road to recovery was anything but smooth. The spread of the Omicron variant presented a setback within a few weeks of SANTOS returning to normal operating hours. Then came the war in Ukraine, which added inflation to every staple food product on top of the ongoing labor and supply chain shortages. It was during this time that Boe and Clement decided SANTOS would focus on dinner service only. Ending lunch service provided a clear vision to move the restaurant forward.

“We are just happy to be a part of the River Parishes,” Clement said. “My partner and I look forward to being a permanent fixture in the community through hurricanes and rebuilding and whatever else is coming our way.”