Student athletes at Lutcher High School are pictured during relief efforts in which thousands of meals were distributed in the aftermath of Hurricane Ida. 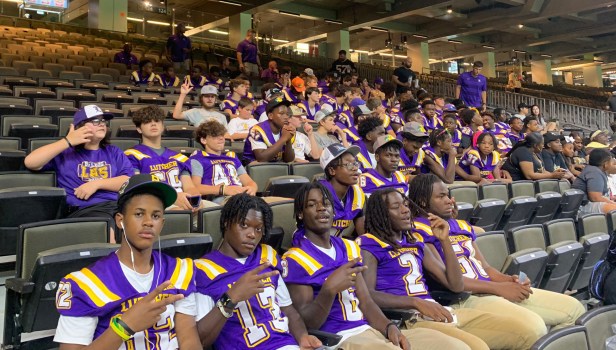 The Lutcher football team enjoys a trip to the Ceasars Super Dome in New Orleans.

LUTCHER — Lutcher comes into the 2022 season after a 7-1 campaign that saw them reach the quarterfinals, as they move from Class 3A to Class 4A.

“It’s kind of different. We return some skill guys, which we have been replacing every year, but we are replacing everybody up front on both sides of the ball,” Lutcher coach Dwain Jenkins said.

Lutcher has one player with experience on the offensive line and one on the defensive line.

Jenkins said that they are unsure if the player on the defensive line will play there because he has been losing weight.

Colin Roque was a 230-pound freshman and now he is 205 as a junior. Rouques is working with the linemen, but the team is giving him looks at linebacker. Roque probably start at linebacker.

Jenkins said they have no true interior defensive linemen. He said guys range from 5-foot-10 to 6-foot-2 and in weight from 205-220 pounds.

“We’ll have to rely on being athletic up front,” Jenkins said.

Left guard Donovan Arbuthnot is the one returning starter on the offensive line.

Jenkins said the offensive line has played those who have waited their turn.

Terreyne Harris is the right tackle with the right guard spot up in the air.

Dewayne Winfield is back for his third season as the starting quarterback.

Last year, Winfield had more than 3,000 yards of offense in 11 games. He had right at 1,800 yards rushing with 28 touchdowns with about 1,400 yards rushing and 19 touchdowns. Those numbers included two games without a carry.

“He is one of the most impressive guys I’ve had a chance to coach,” Jenkins said. “He’s tremendous on the field and off the field. He can throw for 300 yards and then turn around and rush for 300 yards. He’s got three of the top five single game rushing totals in the history of the school.”

On defense, Jenkins said they will be replacing a lot of players on the line and will be undersized.

Jenkins said the story of the defense will be versatility.

He said they have some skilled versatile players.

“Everybody will have to be able to tackle and play the run,” Jenkins said.

The line will have juniors Dale Smith and Brody Louque and sophomore Reshad Sterling.“All of those guys will be first-year starters and undersized, but athletic. Their development will be the key to our success defensively.”

Besides Rouque, two linebackers return to the lineup that includes junior Kai Brown and senior Matt Garon. All three will be three-year starters.

Jenkins said that junior Brock Louque is probably their best guy in the secondary. Jenkins said that Louque can play in the box and in the nickel. Louque started every game at safety last year.

DQ Alexander is a junior, who got a lot of playing time last year. Jenkins said that Alexander can play either safety or corner.

Chaduthaddeus Carter is making a transition from wide receiver the last two years. He is moving to the corner with Jamari Taylor.

Lutcher lost Noah Detilier, who handled all of the punting and kicking duties.

Lutcher will begin the season with a road game against Thibodaux on Sept. 2.