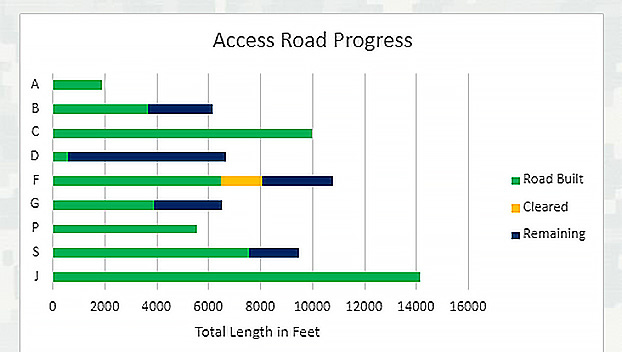 Access roads A, C, P and J are now complete. Access roads A and C are located on the western and eastern sides of Garyville, respectively. Access Road P is North of Highway 51, and Access Road J cuts through the sugar cane field near the River Forest subdivision.

As of August 10, Access roads B, F and S were nearing completion. There is still much work to be done on Access Road D, which leads to the Mississippi Bayou Drainage structure.

Clearing for the sand placement contract awarded to Phylway in late April was underway as of the late week of July. Sand placement commenced in early August.

The U.S. Army Corps of Engineers also reported that two of the three stockpile contracts for the West Shore Levee are now complete, and the next contract to be advertised will be the pile load test contract. This contract is expected to be awarded in September or October.

The West Shore Levee is still estimated to reach completion in 2024.

Some modifications may be made to the project as a result of disaster supplemental funds. A total of $3 million has been provided for a West Shore Lake Pontchartrain General Re-evaluation Report focused on resiliency. Timing and scope of this report is still pending, and the non-federal sponsors are working together to provide the required documents to move these studies forward.

Up to $450 million in additional construction funds has been set aside, and how these dollars are implemented will depend on the findings of the report.

When $760 million was announced for the levee in 2018, the project was considered fully federally funded. An additional $453 million announced in January 2022 was funded by the Hurricane Ida Supplemental Disaster Relief Bill, bringing the total federal investment in the project to more than $1.2 billion.

Monthly stakeholder updates on levee progress can be found at the following link: www.mvn.usace.army.mil/About/Projects/BBA-2018/West-Shore-Lake-Pontchartrain/