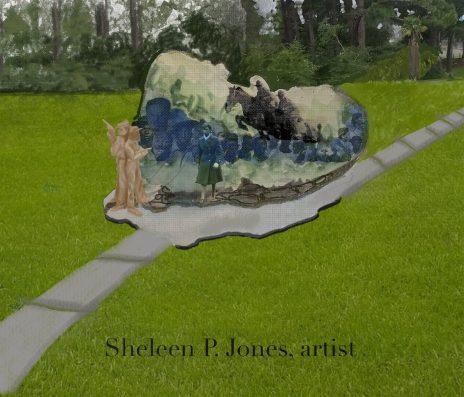 BATON ROUGE, La. – Today, Gov. John Bel Edwards was joined by the Louisiana Legislative Black Caucus, the Louisiana House and Senate Select Committees on Veterans Affairs, military and local officials for the groundbreaking of the first African American Veterans Monument in the Louisiana Veterans Memorial Park. The Monument will be the first of its kind on the State Capitol Complex.

The monument will honor freed, formerly enslaved Louisiana soldiers who fought for the Union during the Civil War as well as soldiers from World War I and II, Vietnam, the Iraq War and more recent conflicts. It will also recognize the sacrifices of their loved ones. According to the U.S. Department of Veterans Affairs, there are more than 80,000 African American veterans in Louisiana.

“I was proud to sign Act 432 by Sen. Gerald Boudreaux last year, which establishes that this important monument be placed in the Louisiana Veterans Memorial Park. Though it has been a long time in coming, the day is finally here when we will pay tribute to the bravery and courage of the African American men and women who have honorably served and protected our state and nation. It is the right thing to do. And as a veteran, I know that when we serve- so do our families. This monument recognizes the sacrifices their loved ones have made as well. I look forward to the day when we unveil this monument and encourage everyone to learn about the great contributions of these and all of our American military heroes.”

“It was an honor to author the legislation that created this monument, and I was pleased that the Louisiana Legislature overwhelmingly supported the recognition and service of our African American veterans,” said Sen. Bourdreaux.

“Beginning with the establishment of the Bureau of Colored Troops in 1862, African-Americans from Louisiana have served our nation in its Armed Forces,” said LDVA Secretary Joey Strickland, COL (USA Retired). “The 1st Louisiana Native Guards, who went into battle during the first and second assaults at the siege of Port Hudson on May 1863, and several regiments that followed, yielded thousands of men including a future Louisiana governor, PBS Pinchback. From these experiences also came the formation of the famed Buffalo soldiers of the 9th and 10th Regiments in 1866. African-Americans since the Revolutionary War have written their stories in blood for the freedom of this country, and it is only fitting that we honor them with this monument in our Louisiana Veterans Memorial Park.”

Retired Brigadier Gen. Sherian Cadoria, from Marksville, Louisiana, was the first African American general in the U.S. Army. She retired after 29 years of service. Gen. Cadoria achieved many firsts during her military career, including: the first woman to command an all-male battalion, the first to lead a criminal investigation brigade and the first Black female director of the Joint Chiefs of Staff.

“We should not destroy our heritage, but build upon it. Let’s add to our past, never destroy,” said Gen. Cadoria.

Retired Lt. General Russel Honoré served for 33 years as commanding general of the U.S. Army at Fort Gillem, Georgia. He also served as the commanding officer of Joint Task Force Katrina and was responsible for coordinating military relief efforts during Hurricane Katrina.

“Having this monument is incredibly important,” said Gen. Honoré. “Our ancestors fought for the right to freedom and equality, and although many generations of African American soldiers were not able to enjoy the fruits of their labor, their sacrifices helped paved the way for me and others. They will never be forgotten, and I’m grateful to Gov. Edwards and Sen. Boudreaux for making this recognition a reality.”

Funding for the monument is through a public private partnership between the Louisiana Department of Veterans Affairs, Entergy and Walmart. The monument will be designed by artist, Shaleen Jones who teaches at Xavier University and has done several other public artworks in the New Orleans area.  It is set to be completed by summer 2023.