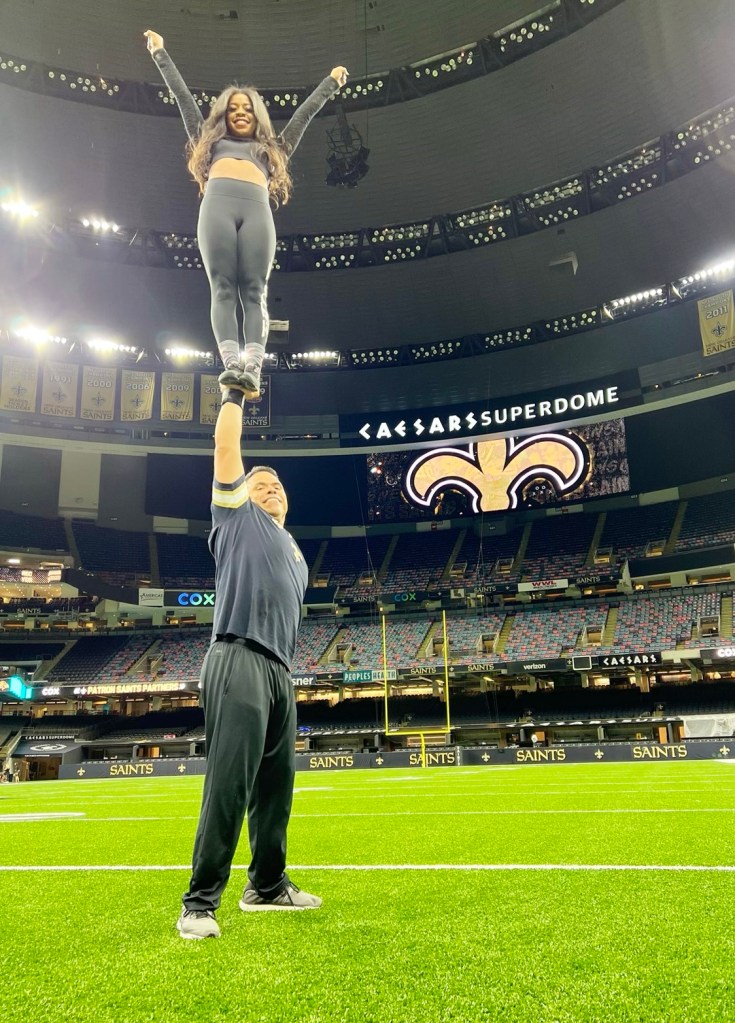 Leonel Muralles performs a stunt where he holds up another member of the New Orleans Saints Cheer Krewe with one arm.

At 43 years old, Muralles is officially the oldest cheerleader in the NFL. Originally from Guatemala, Muralles has strong ties to the River Region as a longtime resident of Kenner and a former resident of LaPlace. He also spent five years overseeing the wellness program for St. Charles Parish Schools.

Muralles enjoys seeing the reaction of young people who initially laugh when they learn he is a cheerleader. After seeing one stunt, their expressions turn into one of amazement.

Growing up, Muralles never pictured himself joining a cheer squad. He was attending Samford University in Alabama on an athletic scholarship when he realized he no longer wanted to play football. He needed to participate in another athletic event to maintain his scholarship, and his roommate suggested cheering.

“My view at the time was that guys should not be cheerleaders because that’s not tough,” Muralles said.

Yet, being a broke college student, he was easily enticed by a bet that he would be treated to a steak dinner if he tried it and decided he didn’t like it. It took hours of practice to start doing the stunts correctly, and he found himself using muscles he never knew he had.

“I fell in love with it, and it became a passion of mine. I did it my entire time in college,” Muralles said. “It’s funny because if you ask anybody who’s a guy cheerleader, 90% of the time their story is just like mine. They played football, didn’t want to play football any more but wanted to do something fun, then got into cheerleading.”

After graduating, Muralles came home to Southeast Louisiana and started a career in exercise physiology. When he and his wife started dating, he told her that if the New Orleans Saints ever had a co-ed squad again like they did back in the early 80s, he would try out.

The co-ed squad was re-established in advance of the 2021 season, and his wife convinced him to go for it.

It was easy to feel intimidated during tryouts while surrounded by a group of athletic young adults, many who likely weren’t born yet when he was cheering in college. When it was time to pair up for stunts, a kindhearted young woman named Jade Thomas was the only one to approach him. At the end of the three-day audition process, Muralles was officially a member of the squad.

“It’s a very unique opportunity because we’ve always been a Saints family ever since we moved here,” Muralles said. “To actually be able to wear the colors and have that experience of being on the field during the games, I can’t explain it. It’s an amazing thing.”

Entering his second year with the Cheer Krewe, Muralles knows his journey would not be possible if it weren’t for his wife. With an active toddler and a new baby on the way, she holds down the household during evening practices twice a week.

Many people have told Muralles that his story is inspirational.

“You can’t use the excuse that I’m too old for this because I’m about to turn 44, and I’m out here with these young guys and holding my own,” he said. “It means a lot to me that I can still do this at my age.”

Muralles is not the only member of the Ochnser Health System family to earn a spot on this year’s New Orleans Saints Cheer Krewe. Victoria Florczyk, who recently joined Ochsner as a physical therapist, is excited for her rookie season on the Krewe. She began sheering at 7 years old after overcoming temporary paralysis from Guillain-Barre Syndrome.

“Once I was discharged from outpatient pediatric physical therapy, my parents could tell that I just wasn’t quite myself, and I didn’t want to be as active as I previously was. My parents had signed my brother up for Pop Warner football starting that summer and wanted me to just try Pop Warner cheerleading for the summer to see if I liked it,” Florczyk said.

In a social media post, Ochsner Health System shared, “Leonel and Victoria, we are so proud of you both and will be watching for you on the sidelines this season. Geaux Saints!”