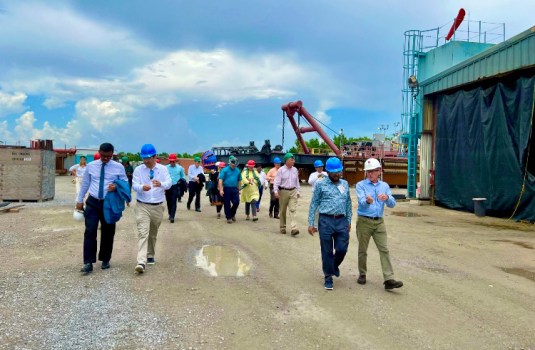 The group met with U.S. Government agencies, and private sector members to discuss the current challenges faced by the Government of Bangladesh and its Delta 2100 plan. 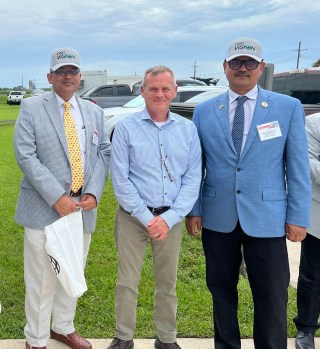 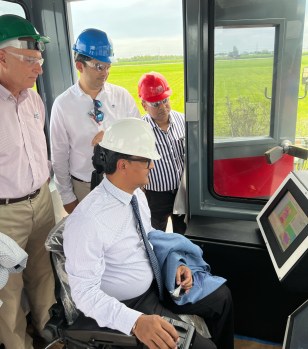 RESERVE – At the invitation of the US Trade and Development Agency (USTDA) under the US Department of Commerce, the State Minister of Shipping for Bangladesh, Honorable Khalid Mahmud Chowdhury led a team of government officials and other distinguished decision makers to the USA for a 10-day visit.  The group met with US Government agencies, and private sector members to discuss the current challenges faced by the Government of Bangladesh and its Delta 2100 plan. The purpose of the Delta 2100 initiative is to mitigate the impacts of flooding and increased sediment build-up by dredging major rivers and waterways. The Bangladesh Inland Water Transport Authority (BIWTA) leads this effort and is purchasing new dredges and related equipment along with the private sector to execute this plan to maintain the navigability of major rivers.

Geographically situated on one of the largest deltaic regions in the world, Bangladesh depends on a vast network of inland waterways for sustaining its economic growth as it relates to agriculture, fisheries, shipping and passenger transport.  The country’s waterway network is almost 15,000 miles long but only about 3,500 miles can be used for vessel traffic due to sedimentation and other climate-related issues.

The Government of Bangladesh is supporting new projects that will improve inland port operations and expand waterfront development.  The delegation was most interested to learn about U.S. technologies and best practices for dredging, inland port operations, waterfront development, navigation, and safety, as well as environmental management, jetty design and construction.

The Delegation visit officially commenced in Washington, DC on August 1 meeting with the US Army Corps of Engineers, the Bangladesh Embassy, US Exim Bank, US EPA, and other organizations.  They traveled to Vicksburg, MS where they toured the U.S. Army Corps of Engineers research and development center.  The US visit ended in New Orleans August 6-10 with visits to the Port of New Orleans, DSC Dredge, Wetlands Equipment and ending with a business roundtable discussion with local companies.

While visiting the Port of New Orleans the delegation was treated to a tour of the Edward S. “Ned” Reed, a custom designed 24-inch cutter suction dredge which was built by DSC Dredge.  After touring the Port the group visited DSC Dredge headquarters and manufacturing facilities in Reserve, LA.  DSC hosted a lunch and provided the group with a tour of three major custom designed dredges that were being manufactured at this location for a major client in the oil sands industry and a prominent USA dredging contractor.

The Honorable Minister was able to experience firsthand a powered-up lever room which showcased DSC’s newest technology, DSC VISION.  DSC the industry leader in dredge technology partnered with Teledyne Marine, the industry leader in subsea visualization technology and Trimble, the preeminent supplier of positioning systems for land-based machine operation.  By combining these proven best-in-class technologies and integrating them via DSC Vision software, dredge operators can approach projects with a new level of confidence and efficiency.  Dredge operators now have eyes under the water.

Following the tour, an in-depth roundtable discussion focused on the challenges Bangladesh currently faces as it pertains to sustainable dredging, the navigability of waterways, threat of climate change and the looming rise of sea levels. Besides navigability, it was agreed that dredging was important in order to protect coastal erosion through raising embankments along riverbanks.  While everything could not be addressed in one sitting, Bob and Bill Wetta captivated their attendees as they shared not only the companies journey to present day success but its ongoing technological advancements that could directly address the country’s economic growth and its need for advanced technologies and development. They made presentations of the new Sharkuda dredge, DSC Vision and a dredge simulator and training which is in the plans of BIWTA.  In conclusion they reassured the delegation that DSC Dredge was willing to address all their concerns and challenges by designing custom dredges to fit their needs.  As the attendees walked away from discussions one could feel the looming sense of optimism for the future of Bangladesh “Delta 2100” initiative and the continued strengthening of a bilateral relationship between the two countries.

Mr. Kazi Inam Ahmed, director of Gemcon, was most impressed by the newest DSC dredge design, the Sharkuda.  “The Sharkuda appears to be designed with Bangladesh in mind, with four walking spuds it can operate during the monsoon season when other dredges cannot.  This unique feature combined with operating without anchors makes this the most efficient dredge in the world.  We need this in Bangladesh”.

For more information about DSC Dredge and its products, services and customized solutions, please visit www.dscdredge.com