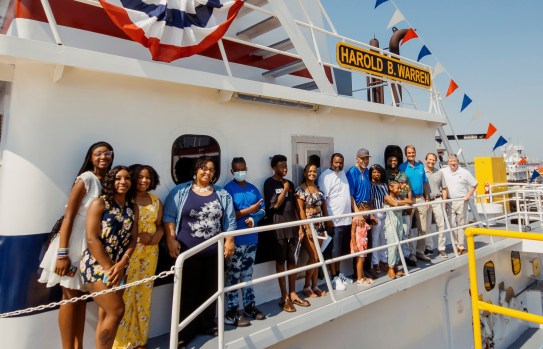 Harold B. Warren received the honor of a lifetime when a vessel was re-christened in his name during a ceremony in June 2022. (Photo by Frank McCormack, provided by Patrick Morton) 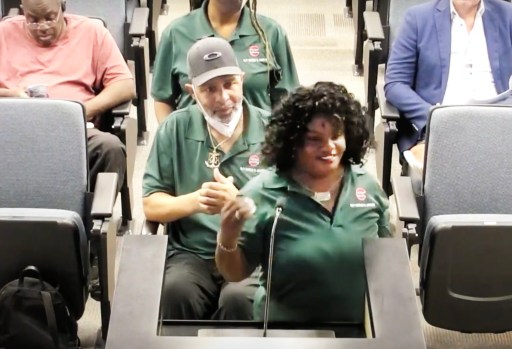 Harold and Loretta Warren approach the podium during the July 26 Parish Council meeting in LaPlace. 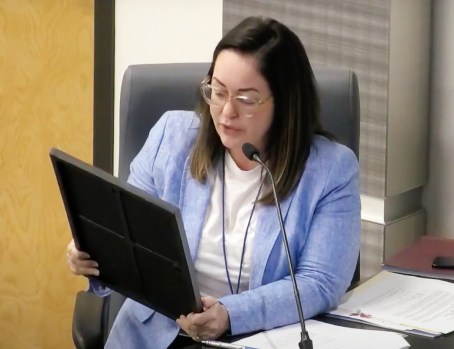 RESERVE — After nearly 40 years working for Ingram Marine group’s Triangle Fleet in Reserve, St. John Parish native Harold B. Warren received the honor of a lifetime when a vessel was re-christened in his name.

Warren learned about the re-christening early this summer when the owner of the company gave him a call and asked if he was ready to “swing the champagne bottle.”

Warren knew that breaking a champagne bottle over the bow of the ship was a christening tradition meant to invoke good luck, but he didn’t understand at first why the owner had called him.

“I asked why, and he said, ‘We are going to christen one of the boats after you.’ Right then, my eyes filled with water and the tears just came down,” Warren said. “I never would have thought that would happen to me.”

Warren began working for Triangle Fleet in January 1983 as a member of the bull gang. He served as a fleet mate and worked his way up to the dispatch office. Today, he is Ingram’s general manager for fleet dispatch for Triangle and Capital Fleets.

According to the proclamation read by Parish President Hotard, “He is a proud husband, father and friend, career driven, hard-working and deserving of the renaming.”

The mv. Harold B. Warren is a refurbished vessel originally built in 1980. The towing vessel measures 70 feet by 26 feet and was acquired by Ingram in 2020.

Warren’s wife, Loretta, had the honor of breaking the champagne bottle over the newly renamed vessel. The ceremony also featured an American flag presentation from the U.S. Coast Guard Sector New Orleans and a blessing for each of the towing vessels courtesy of Rev. Tom Rhoades of Seamen’s Church Institute.

Patrick Morton, assistant vice president of vessel operations for Ingram, has worked with Warren for more than two decades and has seen his dedication to the industry firsthand.

“It’s a big honor in this industry to have a boat named after you,” Morton said. “(Warren) has got a good work ethic. He’s a tremendous person beyond being an employee.”

Morton said Warren is a lifelong resident of St. John Parish who is well known for his music. Through his band Harold Warren and the Innervision, he often performed at Frenier Landing, the St. John Parish Andouille Festival and other local venues.

Many of the Parish Council members were familiar with Warren’s band and were surprised to hear of his accomplishments with Ingram’s Triangle Fleet.

Councilman Lennix Madere and Councilwoman Tammy Houston brought forth the proclamation to Parish President Jaclyn Hotard after learning about the re-christening ceremony.

“Forty years with one company is tremendous,” Houston said. “You deserve everything you are getting and more. We just want you to know that we commend people like you who contribute to this community in such a positive way. Not only did you have a ship named after you; you’ve been called the voice of an angel. Those two compliments together personify your character.”

Madere has known Warren for many years. For him, this honor came as no surprise.

“To have a vessel named after you is an indication of how good of a worker you are and how much they thought of you,” Madere said.

Councilman Robbie Arcuri agreed that to work 40 years with one company is “unfathomable for most people.” He added that he knows of only one other individual in St. John Parish who has achieved the honor of having a boat named after them.

Warren’s wife of 33 years, Loretta, told the Parish Council members how much the proclamation meant to her husband and their family.

“Like I preach to my son all the time, if you work hard and keep your name clean, you’ll get one of those yourself,” Warren said. “If I could start over and do it all over again, I wouldn’t change a thing.”