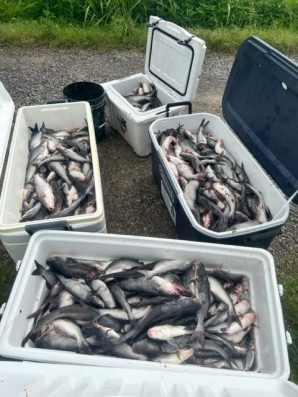 Agents were on patrol responding to a complaint when they contacted the five on the Mississippi River levee just south of the Empire Locks actively fishing with rods and reels.  Agents found them in possession of 665 blue catfish in multiple ice chests.

After further investigation, agents determined that Riley, Jones, Martin and Firth caught over the daily limit of catfish per angler.  Riley, Jones and Clark also failed to purchase a non-resident basic fishing license.

Agents seized the 665 catfish and donated them to Hunters for the Hungry.

The daily limit of catfish is 100 fish in the aggregate of blue, channel, and flathead catfish.

Taking over the daily limit of catfish carries a $250 to $500 fine and up to 90 days in jail.  Not possessing a non-resident basic fishing license brings up to a $350 fine.

The men may also face civil restitution for the replacement value of the catfish totaling $493.73.