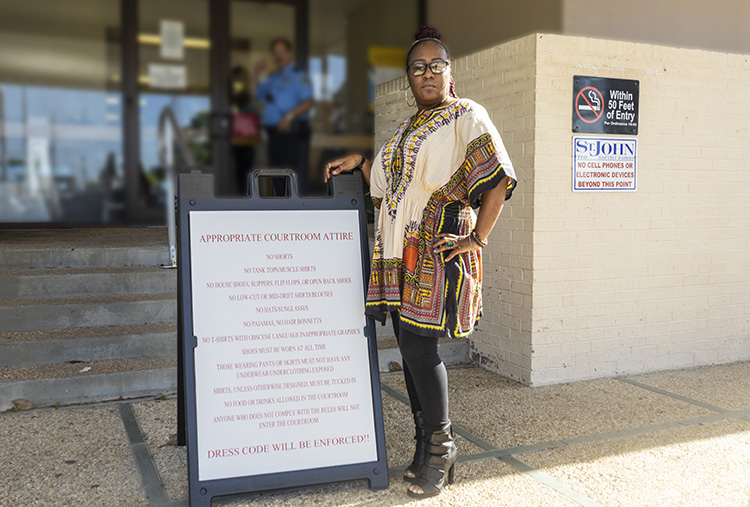 Shondrell Perrilloux stands by the dress code sign placed outside of the Edgard Courthouse.

EDGARD — The ability to attend court proceedings is an important part of understanding how the justice system works, but many citizens are unaware of the rules they must abide by while in a court room.

According to Nghana Lewis, District Court Judge, Division B, 40th Judicial District Court, the court room is a place of business and everyone in attendance should conduct themselves as such.

“It’s reasonable to expect that everyone appearing in court, for the purpose of conducting the business of the court, will be respectful and be mindful of the professional tone that the court seeks to set and maintain,” said Judge Lewis.

These rules of conduct are enforced for every person working in the court as well as people in attendance.

“The judge who is presiding over a matter is bound by rules of ethics to demonstrate courtesy, professionalism, respect for every person who is appearing in court,” said Judge Lewis. “That’s an ethical obligation that the court is bound by.”

To help enforce the tone of professionalism, there is a list of objects not allowed in the court room.

The proceedings in court are recorded by the court reporter, but are not otherwise subject to be recorded or videotaped. The prohibition of cell phones also limits distraction.

“There are no weapons that are permitted,” said Judge Lewis. “Even, let’s say if a person has a permit to carry. Generally, courthouses are spaces where persons are not permitted to bring weapons, and it’s to foster general security of the persons who are in the building.”

There is also a dress code enforced in court to maintain professionalism.

According to the 40th Judicial District Court’s website, “No shorts, tank tops, hats, or flip-flops may be worn in the courtrooms. You may want to bring a sweater or jacket.”

“Anyone can come and observe. Frankly, it’s welcomed because it’s the opportunity the public has to actually see for themselves how these proceedings unfold,” said Judge Lewis.

According to Judge Lewis, attending court proceedings may be a different experience than expected.

“I think there is a tendency for us to kind of rely upon the dramatization of courthouse proceedings on television, and while the drama is entertaining, the reality is that some of the process can be dry and some of the process can be very engaging,” said Judge Lewis. “But all of it is in accordance with the justice system and maintaining the integrity of our justice system.”

Court rules and more information about the 40th Judicial District Court can be found at https://40thjdc.org/.