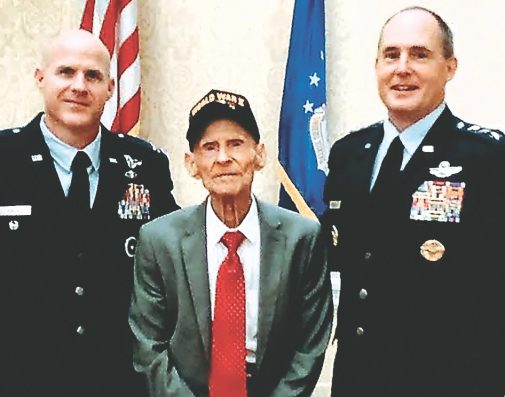 Jerry and his wife, Josephine Plott Green, lived in Westlake in the ’50s, ’60s and early ’70s. The Green’s oldest son Foy Ray, a 1964 graduate of Westlake High School, is deceased. Jason’s parents are David Green, a 1970 WHS graduate and Vaundina Ward Green, a 1970 LaGrange graduate who was a Calcasieu Parish teacher. Lavone Green Fryar graduated from WHS in 1971. The youngest sibling,  Melinda Susan Green Keracik, graduated from a Beaumont school as Jack and Josephine Green lived there for a brief time.

“Paw Paw Jack,” as Jason refers to his grandfather Jack, also pinned his grandson’s promotion to US Air Force Second Lieutenant in 2001 and to lieutenant rank in 2016.

Lieutenant General Kirk Pierce, the commander of the Continental U.S. North American Aerospace Defense Command Region, U.S. Air Forces Northern, U.S. Air Forces Space and First Air Force assisted with the pinning at the recent ceremony. He said it was an honor to celebrate with the Green family the proud heritage of his family and the well-earned promotion of one of the airmen, according to a press release from his department.

“When the general said not many airmen in our force have a 98-year-old World War II  Veteran take part in their ceremony and can note a continuous military family lineage dating back to the 1700s,” Fryar said her father, who has always had a great sense of humor, quipped: “Better learn how to do this without my help, I don’t think I’ll be around when Jason makes general.”

Fryar’s father, Jack Green, fought in the European Theater at the Battle of Monte Cassino in Italy, 1944. He was assigned to the Support Company, 235th Combat Engineer Battalion, 5th Infantry Division, 2nd Corps.

“Dad didn’t talk much about the war during his younger years,” Fryar said. “I read a book about the Battle of Monte Cassino, and now I know why. It was horrific.”

Fryar’s mother was engaged to her father before the war. They married when he returned and she quickly learned not to tap him to wake him.

“He would fly straight up out of bed like coming up out of a foxhole, ready for combat down to making a stabbing motion as if with a bayonet,” Fryar said.  “So, my mother started using a broomstick. It was years before she could get close to him to wake him.”

“Robert Green is the original Green that came to Jamestown and settled at Culpeper County Virginia,” said Jason Green. “He built his home and called it Liberty Hall and had seven sons, the fourth was John Green.”

Col. John Green was colonel of the 10th infantry Volunteers Regiment, which is the original National Guard, and fought during the American Revolution. He has been deceased longer than anyone else buried in Arlington National Cemetery.

Today, Jack Green is primary caretaker for his wife of 76 years. Some days are better than others. Fryar has suggested that her parents take advantage of the 24-hour care at the Veterans Retirement Home in Jennings.

However, Jack Green, a man who loves God and his country – he told his daughter if he was a young man, he’d sign up to serve all over again – soldiers on.

He is grateful that he didn’t put Josephine in a nursing home during the COVID shutdown because he can’t imagine what it would have been like to visit her through glass.

“I made a commitment to the Lord,” he told his children. “She is mine. The first time I laid eyes on her from across the street, I knew right then and there that she would be my bride. God gave her to me. I will take care of her until one of us dies.”

“My father’s idea of a successful life is living an obedient life unto the Lord,” Fryar said. “He raised us all the same way and one of his favorite memories to share has always been of learning to pray from his mother.”

Fryar said her parents did not have much, but they managed their money well, and they were able to retire at 55 to enjoy hunting and fishing.

“He has told us many times that he has been blessed beyond measure and he gives God all the glory.”