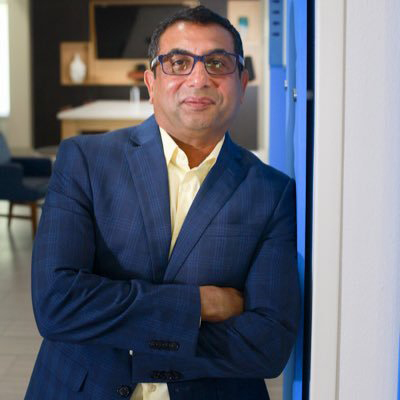 LAPLACE — The International Hospitality Institute, a global advocacy, training and standards organization for the hospitality industry based in Dallas, Texas and committed to fostering excellence in the hospitality industry worldwide, has named Louisiana based hotelier Vimal Patel one of the Top 100 Most Powerful People in U.S. Hospitality.
This international recognition comes just months after Patel was given the Award of Excellence by another global hospitality organization, the AAHOA  (The Asian American Hotel Owners Association – an industry association whose 20,000 members own nearly half of all the hotels in the United States.
No one who has been watching Patel’s rise as an inspiring and impactful leader within the hospitality industry through some of the most challenging years it has ever faced would be surprised by these honors.
Patel is well known in Louisiana’s business and charitable community as the successful owner and operator of nine hotels. He is also the developer of the innovative INNRLY software that is changing the game for hotel operators.   But he has a reputation for a different reason – he is well known as an outspoken – and effective – advocate for fair franchising.  He’s taken that battle to the courts – and to the media.
Associated Press reported on it in a story called “Indian hoteliers test clout in lawsuits against big chains”  and Hotel Online wrote about the “Hard Conversations Between Franchisor and Franchisee” .
Vimal is also regularly quoted in local, national and global media about a myriad of issues: interest rates, supply chain issues, HR and staffing, becoming a trusted source for everything relating to hospitality and business leadership.
More about Vimal Patel can be found at
http://www.qhotels.co and https://www.linkedin.com/in/vimalq/