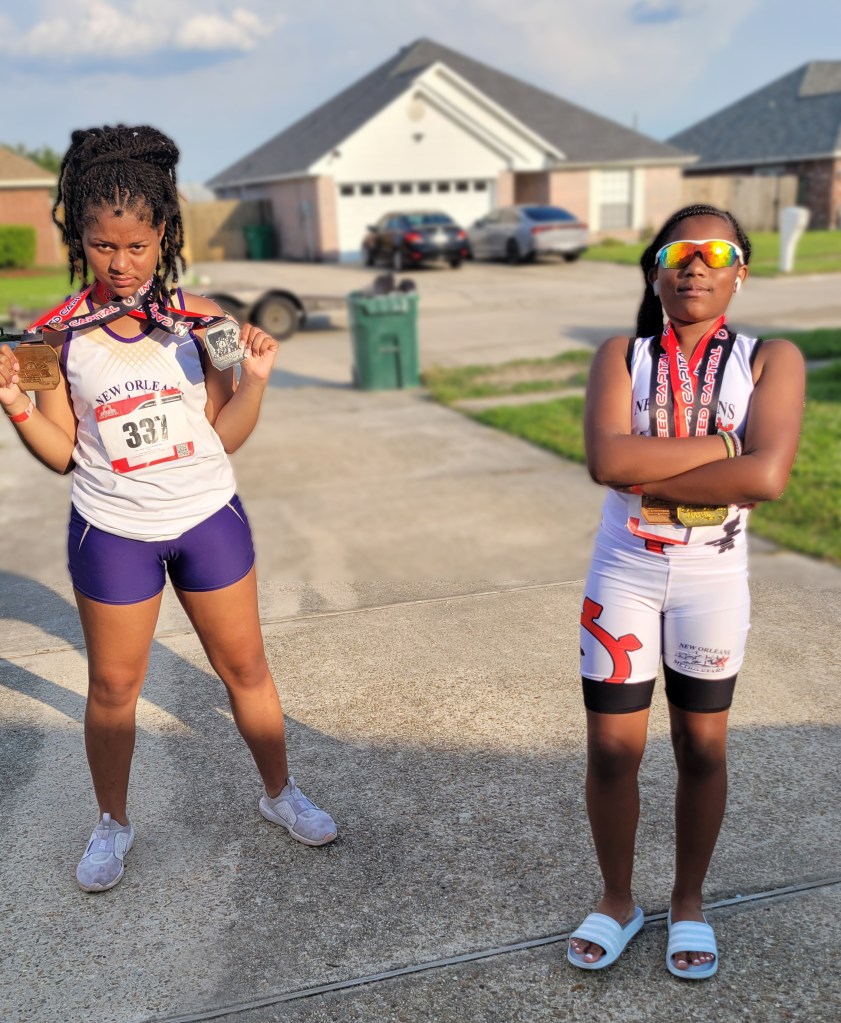 This year marks the girls’ third time competing at the national level. Both girls are multi-sport athletes who have participated in track for the past five-plus years. Competing with the New Orleans Metro Stars Track Club, they qualified for the 2022 Junior Olympics during the AAU Area 11 Qualifiers held in June at Southeastern Louisiana University in Hammond.

Amyrie, a rising junior at East Jefferson High School, is most skilled in throwing events including the javelin and the discus. She sent a personal record in the discus with a distance of 87’1 during the Area 11 Qualifiers. One of her biggest accomplishments thus far has been breaking 30’ in the shot put, a goal she has chased for quite some time.

While this is Amyrie’s third time attending the Junior Olympics, her mother, Danielle Robinson, said each year has presented a new challenge.

“The first time she went was in 2019. It was a transition because once you reach a certain age for the throwing events, you keep switching the weights,” Robinson said. “She didn’t come out in the top eight of anything, but it was exciting for her to qualify while transitioning with new equipment.”

The COVID-19 pandemic struck in 2020, forcing the young athletes to sit out that year. In 2021, Amyrie returned to the Junior Olympics in Texas and once again transitioned to new equipment.

This year, she will be vying for one of the top spots in the throwing events.

When she’s not competing with the New Orleans Metro Stars Track Club, Amyrie stays busy with cheerleading, volleyball and track at East Jefferson.

Her younger sister, 11-year-old Kiyari Ivey, plays soccer and attends the International School of Louisiana. Kiyari is a well-rounded asset to the New Orleans Metro Stars and has competed in a variety of track and field events from the time she was in kindergarten.

Kiyari has represented St. John Parish in the long jump, the 4×100 and 4×400 relays, and multiple throwing events.

“This year is different,” Robinson said. “Kiyari went to the Junior Olympics for throwing last year, but the discus is new to her this year, and that’s her best event. She’s doing really well.”

Kiyari secured a first place finish in the discus with a 46’ 0.75 during the Area 11 Qualifiers in June. On July 16, she set a personal record of 50’ 4 at the SBR Jags Invitational.

Kiyari has also competed in the shot put and javelin this year.

Both girls enjoy experiencing different cities and states as they travel to national competitions.

“A lot of members from our team are going to the Junior Olympics this year, so it will be nice to have a lot of representation from Louisiana out there,” Robinson said.
As a parent, she is most proud when she sees her daughters striving to reach their full potential.

“I just want them to give their all. I’m not so worried about the medal or the place they come in as long as they are consistently getting better,” Robinson said. “Medals come with time and experience. I tell them that you are your biggest competition, not anybody else, and if you just focus on doing your event, everything else will fall into line.”