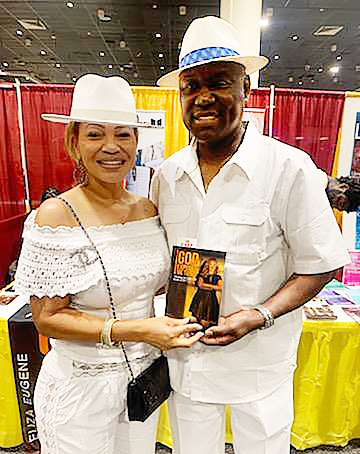 NEW ORLEANS — St. John the Baptist Parish author Eliza Eugene hosted a book signing this past Sunday at the Essence Festival of Culture in New Orleans.

This year’s Essence Festival featured the works of Black writers through a several book signings and meet and greets held at the Ernest N. Morial Convention Center.

When Eugene released “God Exposed Me to Me” in 2020, it was her way of healing open wounds and turning pain into purpose while confronting the woman in the mirror.

Growing up in a single-parent household in the Reserve Housing Development, Eugene didn’t appear to have the foundation for a successful future. She was an asset-limited teenage mother who endured physical, mental and sexual abuse before becoming the person she is today – a college-educated woman and business owner who serves the community through her non-profit Blessed to Be a Blessing.

In “God Exposed Me to Me: Healing the Little Girl Inside of Me,” Eugene tells the story of finding out who her biological father was at 16 years old and tragically losing her brother to murder. She speaks on domestic violence, the dissolution of her marriage, and the pain of breaking off an engagement as she prepared to marry again.

Personal journal entries that inspired the book date back to January 2008. Eugene was motivated to finish the book in 2019 after organizing a brunch that gave more than 50 local women a platform to voice their stories of depression, anxiety, losing loved ones and surviving domestic violence. She realized that no one who walks through trials walks alone.
“In the times we’re living in, I felt it was necessary for me to tell my story. So many kids and adults are hurting,” Eugene said. “Sometimes when they know what someone else has been through and can see the end result, it can inspire them to say, ‘If she can do it, I can do it.’”

Eugene said the Essence Festival experience was an opportunity to touch more lives around the world.

“The experience was truly a blessing and a testimony for me. I was humbled to be a part of the Essence Black Writer gathering. My prayer is that my book will inspire women around the world to be willing to stand alone in their individuality,” Eugene said. “No matter what your story is, just know that you are not alone, and never allow condemnation and fear to paralyze your faith.”