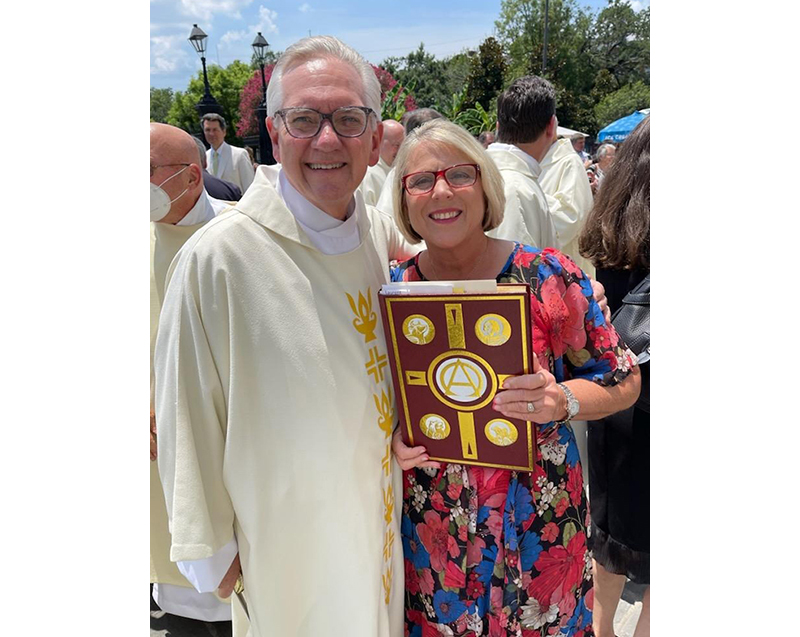 LAPLACE — Ascension of Our Lord parishioner Julius Laurent, a resident of LaPlace, was among 16 men ordained into the Permanent Diaconate this past Saturday at St. Louis Cathedral in New Orleans.

Laurent is thankful for his family, fellow parishioners, and especially his wife of 38 years, Erin, for walking by his side during this journey. According to the Archdiocese of New Orleans, deacons can perform baptisms and funeral services, witness marriages, deliver homilies and set up the altar for the liturgy of the Eucharist. While transitional deacons are in the final stages of training to become a priest, permanent deacons like Laurent may be either single or married and are ordained after several years of theological preparation.

According to Laurent, deacons often operate in the background as overseers of different ministries within the church parish. Laurent is currently assisting a young man through a Rite of Christian Initiation for Adults so he may join the church next Easter. He will also be able to assist with marriage preparation and Bible studies, and the AOL pastor has already put him in charge of revamping the church choir.

Laurent said he intends to be flexible to meet the needs of the parishioners. Walking into the ordination on Saturday, he felt a mix of nervousness and excitement.

“I know this is a big step for me, and it’s something that my wife and I have been working towards for a long time,” Laurent said. “I really appreciate all the prayers, Masses, rosaries and adoration hours that were offered for Erin and me and the words of encouragement that were spoken to us.”

Laurent’s journey to the Diaconate started more than five years ago. During a chance encounter on a Saturday morning, a deacon from Laurent’s church told him he should consider looking into the Diaconate because a new class was beginning soon. It wasn’t long after that Laurent’s daughter mentioned that he would make a good deacon.

After attending an information session, Laurent started the year-long sermon process to determine whether he was well-suited for the vocation. It was up to the Formation team to discern whether he had a calling from God to become a deacon.

Laurent and his wife, Erin, attended meetings once a month on a Sunday afternoon. The meetings involved small group discussions and presentations, as well as some written assignments. Once a decision was made on which men would be accepted into the program, Laurent began attending Formation meetings each Thursday and furthered his studies at the Notre Dame Seminary on Saturdays.

“It was probably during formation that I started to realize that different things had happened to me along the way, from grammar school through college, to prepare me with the skills I would need as a deacon,” Laurent said.

Speech classes and tournaments during his high school years gifted him the ability to speak in front of an audience. Laurent was also used to performing in front of a crowd in a band, and he served as the choir director at Ascension of Our Lord for 20 years. Even before becoming a choir director, Laurent grew up in the church as an altar server and later served as a lector and commentator during Mass.

Laurent also looks forward to moving back into the main Ascension of Our Lord Church building, which received damage during Hurricane Ida. Services are currently being held in a temporary building near the AOL School.