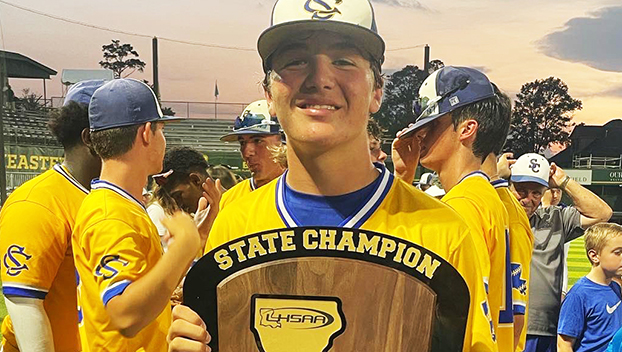 Brady St. Pierre holds the championship trophy following St. Charles Catholic’s state title victory in May. The SCC Athletic Department is receiving the Jimmy Collins Award for persistence and perseverance in the aftermath of Hurricane Ida.

LAPLACE — St. Charles Catholic High School had a storybook football and baseball season this year, culminating in two state titles mere months after the school and community were devastated by Hurricane Ida.

Those successes are continuing into the summer. The athletic department at St. Charles Catholic and the men’s basketball team at Loyola University are each being presented with the Jimmy Collins Award from the Greater New Orleans Sports Awards Committee in recognition of incredible persistence and perseverance in the aftermath of Ida.

St. Charles Catholic Athletic Director Wayne Stein, who served as head coach for both the championship football and baseball teams, said the school’s athletic facility took a huge hit after Hurricane Ida. Even as several teammates remained displaced from their homes, the Comets showed up each day and beautifully told the story of the resilience of the River Parishes.

“This by far means the most out of the awards we’ve received. What our community and what our kids went through really is unbelievable,” Stein said. “We have kids who have either lived in campers, in hotels or with loved ones and are just starting to get back to some sense of normalcy. For us to have had the athletic season that we had really makes me very proud as an athletic director.”

Stein said the Jimmy Collins award represents the dedication of not only the championship football and baseball teams, but every athletic program at St. Charles Catholic that was impacted by the storm.

“The volleyball team had a great season, and they weren’t able to be seeded the way they were supposed to be because they couldn’t meet the required minimum games. The soccer team had maybe one home game this year. There’s a lot to the story that wasn’t about the football, baseball or softball team, and I think that’s why I take so much pride in the award,” Stein said. “We always say that as Catholics our church is the people, not the building, and it’s the same with our school. The school is not the building. It’s our kids, our parents, our supporters, our teachers, our administration and our culture. We are very, very proud to accept that award.”

A total of 27 individuals and four teams will be honored at the awards banquet on July 30.

While the Jimmy Collins Award recipients were announced on June 27, honorees will continue to be revealed over the month-long period leading up to the awards banquet.

The assistant coaching staff at St. Charles Catholic High School has also received recognition on the state and national levels.

Since 2018, the Broyles Award has honored the top high school assistant football coaches in all participating states, showcasing their achievements on the national stage. The Louisiana Football Coaches Association has partnered with the Broyles Foundation to spotlight excellent assistant coaches in the state.

Talley, a Baton Rouge native, has been a teacher and coach for more than 30 years. He’s spent the last five years with the Comets. Talley was also a finalist for Boys Assistant Coach of the Year for the 2020-21 school year.