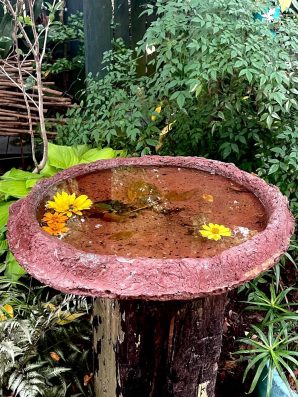 Our weather has made its predictable transition from nice to be outside to distinctly not-nice, as smoothly as my truck slipping into its highway gear. And unlike our airconditioned selves, plants and wildlife are stuck outside hoping for relief.

We knew it was coming, this phase of the never-ending seasonal Mobius strip. Elementary school kids make Mobius strips by taking a long strip of paper, giving it a half twist, and gluing or taping the ends together into a warped loop. What now looks like a simple figure eight now actually has only one side; you can draw a line down the middle and it will go all the way around on both of what used to be two sides, without ever crossing an edge. Pop artist M.C. Escher famously drew large ants crawling forever around one, It is also used to reduce the wear on belts in car engines.

It’s an apt metaphor for how seasons come around smoothly without being celebrated with fireworks. When did Summer arrive? Notice how violas have been replaced with zinnias, and we have gardenias instead of camellias. And stinkbugs are on everything.

I have photos of my garden through all seasons, using the same camera position, showing the scene’s ever-changing plants. Like Oscar Wilde’s sinister The Picture of Dorian Gray, in which the character never ages though his portrait constantly does, I use a photo-fade style during slide presentations to show how, though the garden structures remain constant, the plant palette moves from daffodils to Iris through daylilies, Canna, sunflowers, blazing fall foliage, and back to snow-covered Camellias.

But if I freeze the series on a midsummer photo, it’s obvious that my garden needs more attention. Its plants, chosen with survival in mind, are able to hunker down through the worst weather, but because I am not a nurturing-type gardener they aren’t exactly thriving, and show it.

However, as I adapt every year, those unable to survive get replaced with more durable species, so over time I have ended up with a pretty good picture of what grows best in our worst season with the least care. Of all my plants, the native Liatris, Phlox, coneflowers, sneezeweed (Helenium), goldenrods – seem to hold up best. Email me for my latest list of durable, proven-by-summer-fire plants.

Not to say I shouldn’t be a better gardener, but I’m better at planting than coddling. And I’m lazy. Hot. Tired. Gone a lot. I don’t even have a hose that will reach past my collections of potted plants, which only get watered if I’m gone when my daughter swings by every two or three weeks.

So, I depend on what country folks have done for centuries: Planting really well in wide holes only deep in the middle, using mostly native dirt with only a little store-bought stuff added, loosening roots when I plant, and adding a lot of mulch. Lots of mulch.

Instead of watering like I should, I hope for enough rain until Autumn rains roll back around. Hoping climate change doesn’t alter it dramatically; if not, I will simply choose other plants.

We know what to expect, been here before. But plants and wildlife are stuck outside, either coping or hoping we will help them out. My best advice for now is to mulch, do better than me by watering deeply but not often. Pay attention to what doesn’t do well and make plans to have those replaced before next summer rolls back around.

Oh, and think outside our own needs – maintain at least a makeshift water source for birds, bees, and butterflies.